The Clinton senior golfer won the Lower Peninsula Division 4 championship as a sophomore and tied for third last season. Now, having already committed to a college and with a host of medals and honors in his collection, Fauser is fired up for one more high school season.

Fauser is rested, especially mentally. He was admittedly a little disappointed with not repeating as the Division 4 champion in June. After a busy summer on the course, he focused on his other sport for the winter – basketball – and took some time away from his passion in life, golf.

“The offseason was fine, but when it ended, I really focused on basketball,” the 18-year-old said. “It was nice to get a break. Sometimes it helps to get your mind off things. Everybody has a point where they need a break. I got out a club when I could, but basketball was on my mind.”

This winter, Fauser averaged about six points a game as a solid contributor for the Redskins.

Fauser helped Clinton qualify for the MHSAA Finals as a freshman. Playing at Forest Akers West that weekend, he shot a 76 on the first day and ended up ninth while his team placed fifth.

As a sophomore, Fauser was medalist in nine straight competitions and tied the Division 4 Final record (since broken) by shooting a two-day 5-under-par 139 at Forest Akers East.

Fauser shot a 3-under 69 on the first day, then came back with a 70 on Saturday, tying the record set by Colby Beckstrom of North Muskegon in 2001. It wasn’t just that Fauser did it but how he did it – staying mentally focused.

On the sixth hole at Forest Akers East, Fauser sank a 35-foot birdie putt, then hit the water on the very next hole. Fauser, just 15, wasn’t fazed. He hit a wedge shot to within five feet on his next shot, saving par. 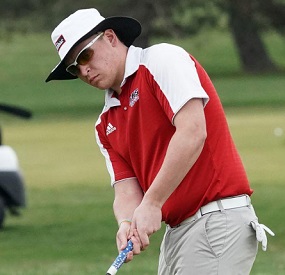 “He has really sharpened his mental game this year,” Clinton coach Nito Ramos said. “I expect him to contend for the top spot in all of our tournaments.”

Fauser is like having another coach on the golf course, Ramos said. He’s always helping the younger players with their games while finding time to focus on his own.

“I enjoy watching him interact with the entire team, giving them pointers here and there,” Ramos said. “He’s a great team member, especially with our really young golf team this season.”

Fauser isn’t the only one in his family passionate about golf. The Fausers have a golf simulator in their barn along with a 40-foot putting green. Like a basketball player that goes into his backyard to shoot hoops, Fauser picks up a wedge or putter and heads to his barn.

“The greens run about the same as a really good course, about nine or 10 on the meter,” he said. “I’m out there all of the time. I putt on that green a ton. I’ll tell myself that I’m going to go out and hit 200 or 300 balls into the simulator, but I end up hitting 50 and go to the green.

“It helps out a lot, especially being in Michigan. I don’t like the cold weather. I can just go to the barn when I need to and relieve stress.”

Fauser also snuck in a golfing trip to Arizona during a break in the basketball schedule.

The Clinton team benefits from the Fausers’ simulator. During the preseason when it’s too cold, windy or snowy to get onto the local course, Ramos can work with his golfers in the Fausers’ barn.

Clinton has the pieces to make a fourth straight run at the Division 4 title. The Redskins host the Regional at Rustic Glen Golf Course and, in addition to Fauser, return juniors Garrett Ramos and Daniel Shovels from the lineup that finished seventh at the Final in 2018. Sophomore Eric Berndt is coming along, and a new golfer to the team, Will Gragg, has been a pleasant addition.

“We have a really good schedule this year,” Ramos said. “We have a lot of goals as a team.”

As for Fauser, he’s anxious to get onto the course. Ramos said the time away from the sport has been good for his star golfer.

“He took a couple months off and got back into the swing about January,” Ramos said. “He has really sharpened his mental game this year.”

Fauser will golf next season at Maryville University, a Division II program outside of St. Louis, Missouri. For now, however, he’s focused on the immediate goals ahead of him – especially for the Division 4 Final in June at The Meadows at Grand Valley State University.

“I still have to get better and work as hard as possible,” Fauser said. “It’s not going to be given to me. Last year was different. I felt a little bit of pressure, even though there really was none. I think I can achieve (the title) again.”

PHOTOS: (Top) Clinton’s Aaron Fauser fires an approach toward the green; he’s entering his final high school season with three top-10 Finals finishes including the 2017 championship in LP Division 4. (Middle) Fauser follows through on a putt. (Photos by Mike Dickie.)