"We can’t lose by one stroke again – that’s what I was thinking,” said Garland, who was individual medalist one year ago as a junior when his team finished one stroke behind Birmingham Brother Rice. “For a little bit, it looked like that was going to happen.”

Instead, Battle Creek Lakeview and Plymouth tied with identical two-day totals of 601, then Lakeview was awarded the championship based on the first tiebreaker – combined No. 5 player scores over the Friday and Saturday rounds at the Finals at Forest Akers West.

Muskegon Mona Shores and Detroit Catholic Central tied for third at 610 and Traverse City West and Saline tied for fifth at 617.

Losing the team championship on a tiebreaker was a tough end to a fantastic day for Plymouth, which was ranked No. 7 coming into the weekend but nearly stunned the field by rallying Saturday with a four-person team score of 299 – best in the field by three strokes. 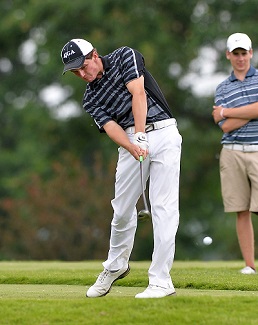 Rodes thought he had won medalist honors after backing up an even-par round of 72 on Friday with a 1-under par 71 on Saturday, for a 143 total. But midway through a post-round interview, tournament officials posted the day’s best score – a 69 from Kleckner, giving him a 143 total as well and setting the stage for more golf.

The duo then played Hole 18, then Hole 10, before Rodes won it in dramatic fashion by snaking in a 19-foot birdie putt in front of a big gallery.

“It was fun making a putt like that in front of all those people,” said Rodes, who will play golf at Eastern Michigan University. “It’s exciting that I won, but bittersweet because we didn’t win as a team.

“We are very bitter that it was determined by a tie-breaker and not on the course, but that’s the way it goes.”

The great putt by Rodes was just a continuation of his hot putting throughout the two-day Finals. Rodes made a 30-foot, breaking eagle putt on the par-five 13th hole and backed that up by draining a 40-foot birdie putt on the 14th hole. That two-hole, three-under par stretch helped Rodes win medalist honors and nearly helped the Wildcats pull off a shocking and improbable team championship.

Plymouth made its move on Saturday as a trio of other teams expected to battle for the team title – Muskegon Mona Shores, Detroit Catholic Central and White Lake Lakeland – were unable to generate any kind of momentum.

That turned Saturday’s round on a warm and unusually calm Forest Akers West course into a two-team race between No. 1-ranked Battle Creek Lakeview and unheralded Plymouth.

In the end, while Plymouth had the best individual player in Rodes, Lakeview had the best team from No. 1 to No. 5.

“Nobody knows the value of one stroke better than we do,” said Lakeview coach Anthony Evans. “Our experience of coming so close last year really helped us this year, no question. It took every single one of our guys to win this thing today.”

Lakeview needed each and every one of those strokes as the tie with Plymouth was broken by taking the score of the No. 5 player each day. Lakeview had an 80 and a 77 from its fifth-best shooter each day for a 157, compared to 161 for Plymouth.

“This whole season has been about our depth,” said Garland, who led the Spartans to a Regional championship last weekend on their home course. “We know how to grind it out when we have to. I didn’t play well at all this weekend, but I tried to get the best that I could out of my round.”

Coach Evans singled out his two sophomores, Alderink and Penegor, for never giving up and making the dream of the school’s first championship since 2008 a reality.

Alderink bogeyed his first four holes on Saturday and appeared headed for a big number. Instead, he righted the ship and played the remaining 14 holes in 1-over par, including an eagle 3 on No. 13.

Penegor came through in an even bigger way. When it appeared that Lakeview might once again lose by one shot, it was Penegor’s 76 as the No. 5 player that created the tie and then the Spartans’ championship via the tie-breaker.

“Those two kids came through for us, and I couldn’t be more proud,” said Evans.