Individually, Coldwater’s shot putters might not be the most sizable guys muscling up to the pit at this weekend’s MHSAA Track & Field Finals.

But as a group, the Cardinals might be the largest ever to advance to championship weekend – and perhaps the most athletic as well.

Coldwater has qualified an incredible seven shot putters for the Lower Peninsula Division 2 Finals at Zeeland.

They’ve been produced by throws coach Mike McConnell, one of the state’s more reputable in those events. But the magnificent seven also are a product of all-around athleticism – six are three-sport athletes, and the seventh plays two sports.

It’s difficult to track if seven qualifying shot putters from the same school was a first-time accomplishment at an MHSAA Regional. But it’s more than fair to call it rare.

“We have three seniors that are the cornerstone of our throwing team, but through the course of this year we have had three juniors and a freshman that have stepped up with them to make us, what I like to believe, one of the best throwing teams in the state,” Coldwater head boys track & field coach Jeff Schorfhaar said. “A lot of this has to do with the athleticism of our throwers … (and) I believe, and of course I am biased, that (McConnell) is one of the best throwing coaches in the state of Michigan.

“This will be something that we will remember for a long time, no matter what happens Saturday at Zeeland.”

McConnell’s work speaks for itself over two decades of Finals placers. He’s had at least one thrower score at an MHSAA Finals in 22 of the last 24 seasons at Coldwater and formerly Camden-Frontier. Highlighting some of the most recent successes, Coldwater’s Logan Targgart won shot put in Division 2 in 2015 and discus in 2014.

Covert and senior runner-up Sam DeMeester advanced to the Finals by finishing among the top two in the event. The other five Coldwater throwers cleared the automatic qualifying standard of 48 feet, 5 inches. Fourth-place junior Zach Gipple joined the personal record-setters with his third-farthest toss of this season.

DeMeester and Gipple also competed at the Finals in shot put last season, DeMeester just missing the medal stand with a ninth place finish. Covert’s 54-7 at this year’s Regional was half an inch farther than last year’s Finals throw. He, Dylan Targgart and Cole Targgart also made the Finals in discus, Covert and Dylan Targgart finishing first and second, respectively, at the Regional with Cole Targgart coming in fourth but clearing the automatic qualifying standard of 142-0.

The Coldwater boys track & field team is enjoying another memorable season as a whole and will be seeking a fourth straight top-10 Finals finish and winning its league and that Regional earlier this month.

Last season, they Cardinals finished eighth as a team at the LP Division 2 Finals, but only 3.5 points out of fifth. Theys were ranked fifth in the final Michigan Interscholastic Track Coaches Association LP Division 2 poll two weeks ago before finishing ahead of No. 3 Battle Creek Harper Creek at both the Regional and league meets.

We told the story at the start of this month of Lansing Christian junior Dawson Block, a multi-sport athlete contributing to three teams this spring – golf, baseball and track & field. 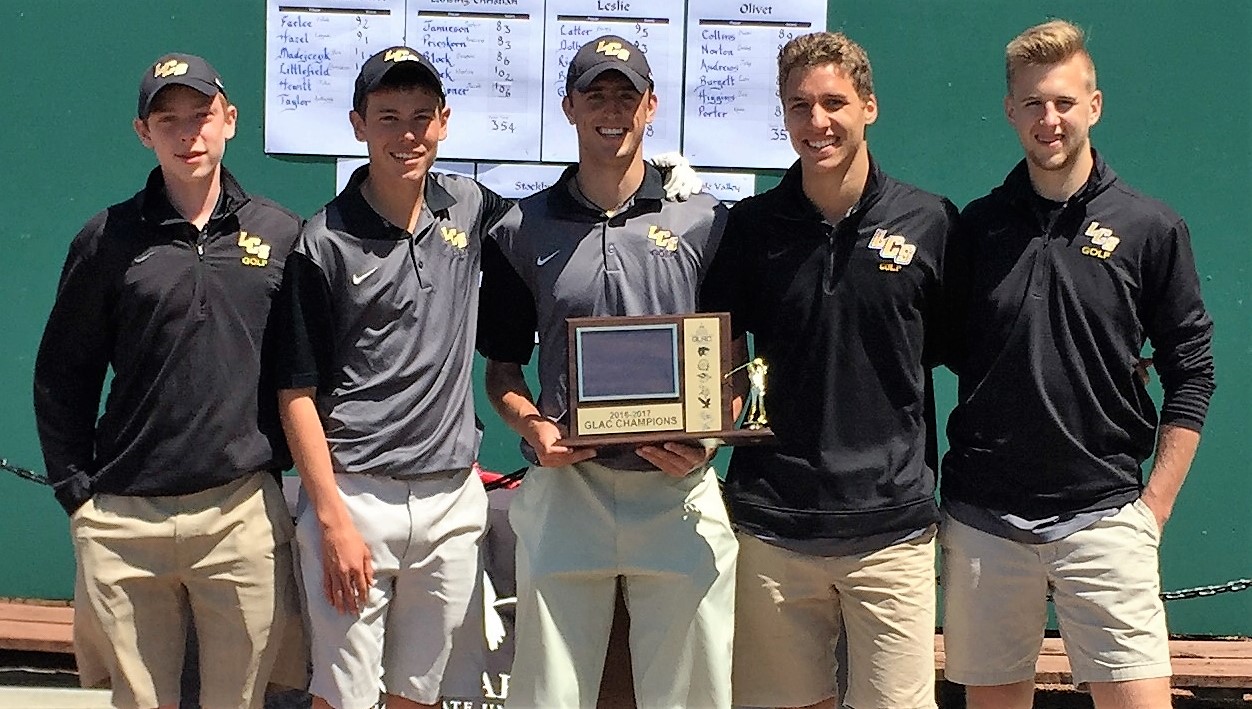 Block helped the Pilgrims to their first-ever league title in boys golf, as Lansing Christian finished one point ahead of Olivet in the Greater Lansing Activities Conference standings based on league jamborees and the end-of-season tournament.

Lansing Christian topped the standings heading into that final tournament, at Michigan State’s Forest Akers East, needing to finish no lower than second to clinch the title. Furthermore, they had to play without two seniors who were on a class trip to Washington, D.C.

With only five players available, the Pilgrims did finish second, just three strokes behind the Eagles. Parker Jamieson and Andrew Preiskorn were co-medalists with 83s, and Block shot a fourth-place 86 – in doing so, he earned the seventh and final spot on the all-league first team.

Block and his golf team continue their season Thursday with a Division 4 Regional at Hastings Country Club, seeking to make the MHSAA Finals for the first time. His baseball team will play in a Division 4 District on Saturday at Potterville. And while Block didn’t advance to the Division 4 Track & Field Finals, he did run a personal record and fifth-place 10:44.62 in the 3,200 meters at his Regional after finishing fourth in the 1,600 in 4:51.84.