By Paul Morgan
Special for Second Half

‘’On the drive up and during breakfast on Friday morning the guys were very quiet,’’ Anderson said. ‘’Today, it was back to normal, having fun.’’

Ben Smith was the Shamrocks’ poster child for quiet-Friday, fun-Saturday.  The junior shot a 6-over par 78 for the first round, but came back for a 2-under 70 on Saturday to help DCC repeat as MHSAA champion.

Smith and junior James Piot (71-77 – 148) have been the leaders on Catholic Central’s team, according to Anderson.

‘’As it turned out James had a good first day and Ben had a good second day, so it worked out pretty well,’’ the coach said.

The turnaround for Smith was pretty simple.

‘’Today, I think I missed like two fairways and Friday I think I hit only two fairways,’’ Smith said. ‘’On the first day, it wasn’t really nerves, but I just wasn’t hitting it well and I couldn’t find the fairway, which leads to problems on this course.

‘’Overall, I played really well, but I left a few shots out there. I three-putted twice for par and missed a couple of short ones, but that’s going to happen.’’

Three holes on the back nine were crucial for Smith and his teammates. The junior double-bogeyed the par-3 13th hole, but came back with a birdie on the par-5 14th and then drained a long putt on the par-4 15th for a par.

‘’After making the double bogey, I used that to motivate me to play better,’’ he said. ‘’Luckily, I had that short par five and it’s a birdie hole.

‘’I was thinking to hit a drive out there, put it on in two and either get an eagle or birdie, which is what I did.’’

Added Anderson: ‘’Ben’s played well all year and Friday was his worst round of the season.’’ 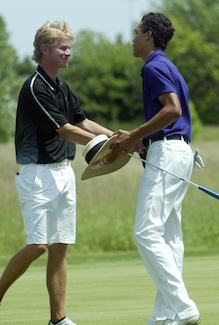 ‘’They didn’t lose an event all year,’’ Anderson said. ‘’All the boys on our team are going to play college golf and they have bright futures.’’

That goes all the way to Catholic Central’s ninth golfer.

‘’My sixth-through-nine golfers could make anyone’s top five,’’ he said. ‘’They will probably play college golf and they can’t make their high school top-five.’’

‘’The kids played well both days,’’ Roby said. ‘’Friday night, we reviewed where we potentially gave away some strokes and it was in the last four holes.

‘’One of the things with this team is our play in that stretch. We just came up short today.’’

Actually, it was most of Catholic Central’s players getting off to hot starts, which put Grosse Pointe South in a position of playing catch-up all day. As a team, the Shamrocks had a seven-stroke lead over the Blue Devils after six holes.

‘’We talked about continuing to do the same things we’ve done all year,’’ Anderson said about the Saturday pep talk. ‘’We have to play our game, which is hitting greens and fairways, making good decisions and taking the double bogey out of play.’’

In doing so, the Shamrocks won the school’s fourth MHSAA golf championship in the past 13 years.