But then again, as the saying goes, in sports anything can happen.

That’s when the switch got flipped.

The DCC team – including star Peter Stassinopoulos – had been playing better than most, but at that point not well enough to overcome Skyline’s first-day lead.

But the senior finished the day at 2-under par 70, by way of a sizzling run of 5-under par on the last four holes (birdie, eagle, birdie, birdie) to lead his team to a huge comeback win over Skyline with a Saturday team score (top four golfers) of 2-under par 286 to Skyline’s 293. The final margin was 587-589 for the two-day Division 1 Final tournament.

“I’ve been saying this to myself the last couple of weeks, ‘pedal to the metal,’ regardless of where I’m at, and regardless of who is around you, or what they tell you, or what the conditions are,” Stassinopoulos said, soon after getting a dousing of ice water out of a cooler by his teammates during a TV interview. “I saw my coach’s face on 14, and he didn’t look too happy. And I just knew that we either had to finish strong or at least put a good game face on. I didn’t know where we stood (team scoring), but I made the right swings and our team got it done.”

DCC coach Mike Anderson described the final 45-60 minutes of play like this:

Anderson said that he was at the 15th tee box, a par 3. Skyline was 10 strokes up at that time.

“I was talking with the Skyline coach there and I didn’t say congratulations (you won), but I said, ‘It’s been fun watching your team today. You’ve played really solid all day.’

“Then our Liam (Casey) hit it in there to one foot and tapped it in for birdie. The next guy hits it in there close and makes birdie, the next guy makes par. And every time we’re doing that the Skyline guys are making bogies.”

Anderson went to the 16th hole, where his players were making birdies on that par 5 hole, after Stassinopoulos made an eagle. By the time both teams were going through the 17th tee, the team scoring was tied. 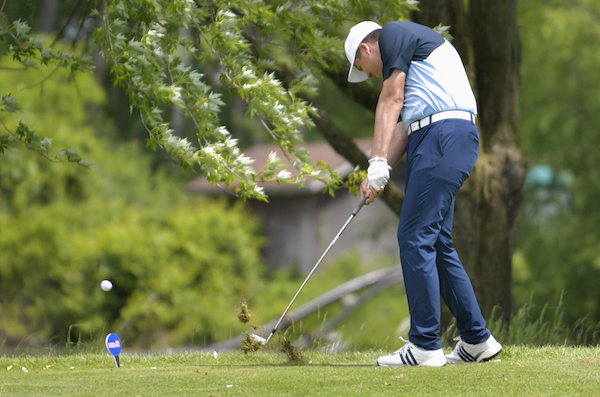 Skyline sophomore Ieuan Jones played solid and steady to win individual medalist, after a runner-up showing last year as a freshman. He scored 69-69-138 to win by six strokes over junior Andrew Daily of Brighton and East Lansing sophomore Drew Miller.

Jones said he can never be disappointed by winning a tournament, which he’s done many times in his short career.

“I’m a little disappointed we didn’t get it done as a team, but I’m happy I left everything out there,” Jones said as players and teams were gathering around the scoreboard. He said the key is always the drivers and putter, and if those are going well it’s all good.

“I was making sure that I stayed focused on every single shot,” Jones added. “I knew the team scoring was going to come down to some pretty close numbers, so I was making sure I did what I could.”

Jones was very cognizant of the strong winds blowing across Katke. The wind picked up in the afternoon when he was playing the back nine with more tree-lined fairways providing some protection – that same back nine where the winning Shamrocks team poured it on. The runner-up finish to Skyline last year was a huge motivation for DCC’s golfers.

“Going off the first tee, I knew they’ve got one (title) under their belts, and just want another one,” Stassinopoulos said. “And we really wanted our first for this groups of guys. We’re out there day and night, rain, no rain, and I think this group of boys deserve it.”