GLADSTONE — Carney-Nadeau sophomore Hunter Eichhorn has displayed a flair for playing under pressure in a tournament atmosphere. He proved it as a freshman a year ago, winning a playoff for his first Upper Peninsula medalist.

This year however, there was nothing but dominance.

Eichhorn blazed through the course at Irish Oaks, collecting multiple birdies and blowing the rest of the field away with a 4-under par 68 — among the lowest scores in recent U.P. Finals history — to once again take medalist honors Thursday at the Upper Peninsula Division 3 Final.

Eichhorn's 68 came in six strokes better than anyone else, and also bested his winning score from last season by three strokes — the result of relentless work to continually improve his game. In fact, after finishing his round Thursday, Eichhorn immediately went back to work on the putting green, displaying the kind of work ethic rarely seen in a young athlete.

"I always like to improve. I keep putting in time, and it was nice to see the results show that," Eichhorn said.

Carney-Nadeau head coach Jake Polfus has seen Eichhorn's competitive side come out plenty of times before, but is still impressed by it.

"What does he do when he gets done with his round? He goes to the putting green," Polfus said. "How many kids do you see do that, especially when you have to walk that far. It's a tribute to how much time he puts in."

Like a true competitor however, though generally satisfied with his round — he came up with six birdies and avoided a double bogey — Eichhorn remained slightly critical of himself.

"I didn't hit my tee shots very straight today, but I putted well and I was able to recover. I hit some solid iron shots from places I didn't want to be in," he said. "I had two good eagle putts and both came about an inch from the hole, but tapping birdies aren't that bad I guess. I had one bad lip-out for par, and I 3-putted another hole, but that was about it."

Led by Eichhorn, the Wolves also were able to claim the team title for the first time in school history with a total score of 342 — two strokes better than Munising and DeTour — among the 23-school field. That largely was due to the performance of sophomore Kage Linder, who shot a career-best 86, and freshman Chase Linder, who shot 53 on the back nine, but recovered to card a 45 on the front, coming in under 100 for that final push. 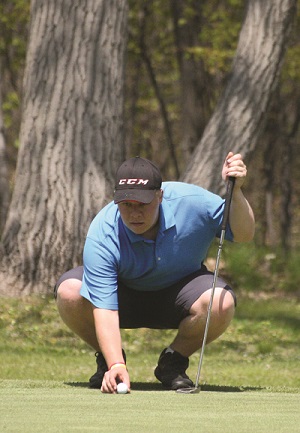 "Chase played a lot better in the front, and Kage had his best round of the year by about 8-10 shots. That's huge," said Eichhorn. "To be able to get a team trophy for the first time is pretty awesome. It's all about the team. I like to improve on myself and win, but it's nice to get a team trophy."

Painesdale-Jeffers, which was shooting for a U.P. Finals four-peat, settled for fifth and couldn't overcome a steep drop-off after runner-up medalist Jacob Zerbst's 74. All five of Cedarville's golfers came in under 100 as well, as the Trojans placed fourth with a team score of 347.

Thursday marked the final event of Dave Duncan's long coaching career. Duncan, who has a 429-166 record coaching boys basketball, will retire just as his son Joey, an all-state basketball player and solid golfer in his own right, graduates.

There was much anxiety and excitement toward the end of the day as players and coaches gathered around the scoreboard. Munising and DeTour were among the first complete teams to finish, and both came in at 344. The tiebreaker went to Munising, with the Mustangs' fifth golfer Kyle Welters (98) providing the necessary edge.

The Wolves may not be going anywhere, anytime soon. All five of their golfers Thursday were freshmen or sophomores, and with the star power of Eichhorn, interest in the program could only grow. On Thursday, Eichhorn was the only golfer to have a decent-sized gallery following him throughout the day.

"Hunter really played great today, better than I think he was even expecting. For as much golf as he plays, he's only going to get better," said Polfus. "Chase going from a 53 on the back nine to a 45 out front, that's huge for us, and really made a big difference. Kage shot his best score of the season.

"It's just awesome," Polfus added. "The kids were excited as they were adding up the scores. It's really cool."