EAST LANSING – There couldn’t have been three more appropriate words for Clarkston Everest Collegiate boys golf coach David Smith to describe the past, present and future of his golf program at the moment.

The past was already good heading into this weekend’s Lower Peninsula Division 4 Final at Michigan State University’s Forest Akers East, since Everest Collegiate entered as the reigning champion.

The present turned out to be good as well, since Everest Collegiate successfully defended its title, accumulating a two-day score of 629 to outlast runner-up Grand Rapids NorthPointe Christian by 11 strokes.

If all that weren’t enough, the future could be even brighter for Everest Collegiate since it loses only one golfer from its lineup heading into 2018.

As for Saturday’s successful defense of last year’s championship, Everest Collegiate showed its resolve on the second day after finishing in a tie with NorthPointe Christian the first with identical scores of 319.

Everest Collegiate played like a team that had been on the big stage before, seeing three golfers break 80 on the second day, led by sophomore Mitch Lowney’s 71. 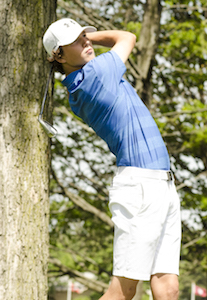 Senior Joey McMahon shot a 76 and junior JC James fired a career-best 78 to flank Lowney for the Mountaineers.

“They couldn’t wait to get here,” Smith said of his team entering the second and final day. “There was not a single guy who was nervous. They all have been to states. They knew exactly what to expect.”

NorthPointe Christian also had three players break 80 on Saturday, led by sophomore Erik Fahlen, Jr., who shot a 75. Junior Hayden VanErmen shot a 78, and junior Logan Holtkamp followed up a round of 71 on Friday also with a round of 78 for NorthPointe Christian, which couldn’t quite match Everest Collegiate’s depth past the first three scorers.

However, none of players in NorthPointe Christian’s lineup were seniors, so everyone should return a year better and wiser in 2018.

“Disappointed that we didn’t win, but it was a good year,” NorthPointe coach Erik Fahlen, Sr., said. “Our four and five guys have never been to the state finals before. We don’t have any seniors in the starting five, so we got a good shot (next year).”

Fauser played as a freshman in the Finals last year and had a clear gameplan for Forest Akers East this week.

“I knew what I needed to do and the shots I needed to hit,” Fauser said. “I practiced all wedge shots throughout the week. It’s a little more open so you can hit driver out here a lot.”

Lowney was the individual runner-up, finishing four shots behind Fauser with a two-day total of 143 (72-71).