Five was the key number during the MHSAA Lower Peninsula Division 3 Boys Golf Final at the Bedford Valley Golf Course in Battle Creek.

Division 3 powerhouse Jackson Lumen Christi was aiming for its fifth straight championship, while Lansing Catholic was looking to snap Lumen’s string and win the fifth golf title in Cougars history.

For two days the two powers battled it out. And in the end it was Lansing Catholic that came out ahead.

Thanks to a strong Saturday, the Cougars finished with a team score of 613 to defeat Lumen Christi by five strokes.

The seeds for Lansing’s Catholic’s title actually were sewn last season when the Cougars recorded a five of another kind – finishing fifth at last year’s Final.

That team, however, had no seniors in the lineup and all five starters were back this spring.

“We had high expectations going into the season,” Lansing Catholic coach Charlie Furney said. “We pretty much had our entire team coming back. We set a goal of improving on that fifth-place finish, and we figured we had enough talent to finish on top. And that is what we did.”

Balance was key to the victory as all five Cougars finished within 15 strokes of each other.

Junior Brent Marshall led the way as he carded rounds of 73 on the first day and 74 on the second to finish with a 147. That score was good enough for second place as an individual – but the team title was more on Marshall’s mind.

“It felt great,” Marshall said. “That was our goal going into the season, and it felt great to fulfill it.”

Marshall was not the only Lansing Catholic golfer to finish among the top 10 individually, as senior Jacob Johnson put together rounds of 79 and 73 to finish with a 152 total and in a tie for ninth.

The Cougars also received a 156 from Adam Elias, a 160 from Joey Jurkovic and a 162 from Niko Voutsaras.

“The key was our number five guy Adam Elias,” Marshall said. “He shot a 75 on the second day. He really came through and helped us push ahead of Lumen Christi.”

That 75 came in handy for the Cougars, who trailed Lumen Christi by seven strokes, 304-311, heading into the final day.

“We have two very good players in Johnson and Marshall,” Furney said. “We knew that in every tournament we would have a couple of low scores. The key to our success is our depth, and the number three and four players. In the District and Regional our fourth score was 89. The key for us was to get that fourth score in the low 80s, and that’s what we did.”

Lansing Catholic’s fourth score on Friday was an 81 from Elias, while on Saturday the fourth score was an 80 from Voutsaras.

While the title was the fifth for the Cougars, it was the fourth under the watch of Furney. Furney also coached the Cougars to titles in 2001, 2004 and 2005.

“Every one is special,” Furney said. “This year’s team was a little different in that we had two returning all-state players.” 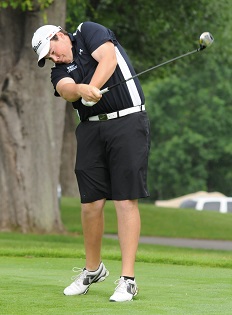 With all but Johnson returning next season, the Cougars will be looking to add back-to-back titles for the second time in 10 years.

“We graduate our best player, and it will be a big loss,” Marshall said, “but we have all our other players returning, and we hope that we can make up for it.”

For runner-up Jackson Lumen Christi, a fifth straight title was not something that was expected heading into the season.

“We lost five of our top six players from last year’s team,” Lumen Christi coach Dave Swartout said. “It was really a rebuilding year for us. We didn’t start out very well this season, but the kids really worked hard at their game.”

That hard work was evident on the first day of the tournament as the Titans totaled a 305. The Titans then finished with a 314 on Saturday.

After shooting a 72 on Friday, Weatherhead turned his game up a notch and carded a 68 on Saturday to finish with a 140 total.

“It was a good way to go out my senior year,” Weatherhead said. “I was down a couple of strokes after the first round. I came back on Saturday and shot my first round in the 60s all season. It felt good especially after I was in the 60s a couple of times last year.”

Weatherhead credited his work on the green as being the key for his second-day charge.

“I had a lot of putts fall for me on Saturday,” Weatherhead said. “I was coming close and burning the edges on Friday, and on Saturday they were falling. I probably hit about the same amount of greens and fairways on Friday, but the 15-footers were falling for me and that was the difference on Saturday.”

Weatherhead built momentum early Saturday and kept it going throughout the day.

“I think I made six birdies and two bogeys,” Weatherhead said. “I had a couple of key up-and-downs coming into the last five holes. I thought the course set up well for me. It was a nice way to cap off the year.”