Piot – who has since moved on to play at Michigan State – was never an MHSAA Finals individual champion. But recently he achieved something much bigger, winning the ultimate individual crown for amateurs – the 121st U.S. Amateur Championship.

His championship run concluded Sunday, Aug. 15 at the iconic Oakmont Country Club with a 2 and 1 match play victory over Austin Greaser of Ohio and the University of North Carolina.

Piot led the Shamrocks to a Lower Peninsula Division 1 runner-up team finish in 2014 as a freshman, followed by three consecutive championships creating arguably the best era of high school golf for any one program in Michigan history.

“I think his team winning meant just as much to him than any individual title,” Dewling said. “Truly he’s one of those types of guys.”

Now on the national stage, Piot defeated Greaser of Ohio, 2-and-1, by sinking a 20-foot par putt on the 17th hole of the day’s second round in the scheduled 36-hole national final.

“It's the greatest feeling in the world,” Piot said to the national media on site. “I mean, as an amateur it's the best thing you can do. It was making that putt on 17 was just like, ‘Oh, my God. I might've done it.’”

By winning the elite amateur tournament, Piot is to receive presumably automatic exemptions into three professional majors next year: The Masters, the U.S. Open and the British Open. That alone is a career-defining bucket list for anyone in golf – and he’s still a college student.

Piot was playing in the U.S. Amateur for the second straight year. In 2020 at Bandon Dunes (in Oregon), he was second in stroke play to enter the match play portion the No. 2 seed. He won his first match but then was bumped out in the round of 32. 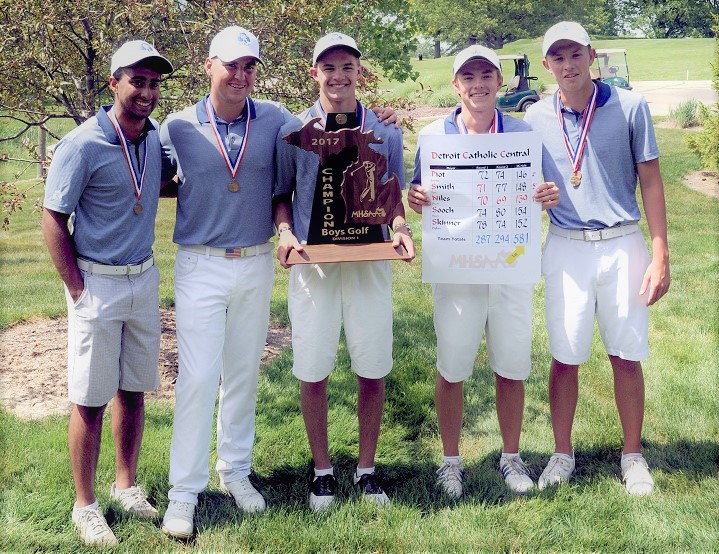 This year he finished his unfinished business by cruising through the match play, winning three of his six rounds with identical scores of 4-and-3. In the final, Piot was 1-up after the morning round of 18 holes. But after a lunch break and change of shirts from a dark color to a white one with a green Sparty golfer logo, there was a 4-hole swing where Piot found himself down three after 27 holes.

The tables turned hard at that point when Piot won four consecutive holes (10-13), and five of six, to go 2-up with three holes remaining, eventually grabbing the win 2-and-1.

Standing at that 10th tee, Piot was down three holes and TV commentator ‘Bones’ MacKay said it would be very difficult for Piot to get back into the match.

“I gave him the nickname when he was 9-years-old of ‘Spunkdog,’ because he’s got so much fight,” said Brian Cairns, his long-time teacher at Fox Hills Learning Center in Plymouth. “He’s in a corner by himself, he’ll come out every time by himself. He’s got spunk. You saw how he walked; you saw how mellow he was. You saw his shoulders go up on the back nine. He made the swings when he needed to make them.”

Dewling provided a similar but different angle on Piot.

“He took pride that he’s a public course guy and put that chip on his shoulder to beat people,” Dewling said about the high school years. “He’d watch other people practice and play and he believed he was doing things different and better than they were.

Piot has always shown gratitude for the support he’s received over the years from high school buddies to his family and fans of both Catholic Central and MSU – who made up a huge section of the crowd that memorable Sunday afternoon at Oakmont.

“Mom and Dad have always been there, and I’ve been blessed to have the family and the support system I had before I even got to Michigan State,” he said. “I also had my high school coaches there (at Oakmont), Mike Anderson, Rick Williams (Detroit Catholic Central) and Jimmy Dewling, who are great mentors to me in life as well. It’s an extreme blessing to have some of the people in my life and seeing them (at Oakmont). Beyond golf, it was the coolest thing in the world.”

During his Catholic Central career, Piot was not one to dwell on “what could have been” after his MHSAA Finals individual title pursuits. He tied for sixth in Division 1 as a freshman, eighth as a sophomore, fifth as a junior and placed fourth alone as a senior in 2017.

“I think he understood the process better than anyone else – that one or two days of golf wasn’t going to define him. He’s got bigger aspirations than just one tournament," Dewling said. "He truly had an outlook and a perspective that’s so much greater than anything else. He’s so composed in high-pressure situations because he realizes his goals are still in front of him.

“James just plays with a chip on his shoulder, and I don’t think winning the U.S. Amateur is going to change that either. That’s the kind of competitive person he is.”

The people who know Piot well said he won’t change his life much in the short term at least, and will compete with the Spartans this fall and spring while finishing up his degree in finance. His Spartans have unfinished business as well, going after a Big Ten title.

“I just want to enjoy my last ride with the boys,” he said. “My school credit load might shift in the spring … but I’m looking forward to the college season and getting back out there with the Spartans. … We’re going to have a really good team and our goal this year is Big Ten champions, and hopefully we can do that.”

After receiving the U.S. Amateur trophy from the USGA officials, Piot gripped the golden hardware with a graceful respect, and turned it around a few times while looking it over. He was then asked if any past winners’ names stood out to him.

“I was just trying to see if it was real or not. I couldn't believe it. I mean, I honestly was like, did I just win the U.S. Am, in the back of my mind,” Piot answered. “I didn't really sit there and stare at all the names.”

Yet from now on and forever in history, James Piot’s name will be on that special trophy for others to search out and admire.

PHOTOS: (Top) Detroit Catholic Central grad James Piot, now playing at Michigan State, keeps an eye on his shot during a 2020 Golf Association of Michigan event.  (Middle) Piot, second from right, stands with his Detroit Catholic Central team after the Shamrocks had clinched their third-straight Finals championship in 2017. (Top photo courtesy of Golf Association of Michigan; middle photo by HighSchoolSportsScene.com.)