The conclusion, however, turned out just fine and resulted in a history-making performance.

The Cougars won the program’s first Finals championship Saturday after shooting a two-day total of 612 at The Meadows at Grand Valley State.

Catholic Central finished 28 strokes ahead of runner-up Big Rapids, which tied Hanover-Horton, but won on a fifth-score tiebreaker.

“They actually started out a little bit shaky,” longtime Catholic Central coach Kim Napieralski said. “I wasn’t sure which team I brought (Friday) morning, but then they righted the ship. I think they were a little bit nervous, especially with a young team. The senior leadership was there, but there were some nerves the first few holes. They were fine after that and finished strong.”

The championship capped off a highly successful sports season for Catholic Central, which won football and boys basketball Finals titles in the fall and winter, respectively.

The Cougars, who hadn’t been to the Finals in boys golf since 2015, were led by freshmen Will Preston and Matthew Sokorai, who shot matching 155s to tie for 13th. Senior Andrew Armock was next at 157, and junior John Harmon carded a 160. Junior Luke Preston and senior Thomas Grile combined to shoot a 162 over the weekend.

“They are young, but they are talented and focused so I thought they could do it this year,” Napieralski said. “We don’t have a weak link at all. Anybody could flip for anybody, and it’s been that way all season.”

Catholic Central shot a stellar 306 on Friday to gain control with a 14-stroke lead. The top four golfers shot in the 70s.

“The best teams in sports are the ones that are close with each other and can rely on each other,” Armock said. “We have good chemistry and we all get along, and for our coach to win Regionals and state at the same time for the first time ever is really special.”

Grile, who’s been on varsity all four years, tied his personal low with a final-round 78.

“It’s one thing to shoot 78 with my friends, but this was with tough competition and all eyes on you,” he said. “It was pretty cool to shoot that score and tie my record, and we were always just trying to make it to the state finals. To win it is amazing.” 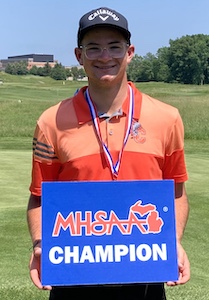 “They are great kids and they score well, but they are fun to be around, too.” Grile said. “It’s a pleasure to have them on our team, and just having them help us win a state championship is great.”

Maybank, in his Finals debut, shot a scorching 6-under 66 in the first round and then followed it with a 69 on Saturday.

He broke the record previously held by Grand Rapids West Catholic’s Sam Weatherhead, who shot a 136 in 2012.

“I hit it great on Friday, and I did everything really, really solid,” Maybank said. “Today wasn’t as good as yesterday, but it was another good day. I started out a little shaky, but I started to hit it really good after the seventh or eighth hole and then made some nice putts.”

Maybank, who won his first junior golf tournament when he was 7, was one stroke from tying the all-time Finals’ record of 134, held by Hamilton’s Nick Carlson (2015).

“My approach shots were really solid, and I think I hit the most greens I’ve ever hit in a tournament and that really helped,” Maybank said. “This was definitely one of my goals, to win Regionals and win state, so to do both and play this well is definitely all I could ask for.”

Big Rapids experienced another heartbreaking near-miss finishing second for the fourth season in a row.

“We didn’t have too many kids with state finals experience, and we sent our seniors out with four straight runner-up finishes and we had a third,” Big Rapids coach Mark Posey said. “You won’t find too many programs in the state that have that in the last five years. We’re proud of that, and these boys work hard, they listen to their coaches and they know what it takes to play well.”

PHOTOS: (Top) A Grand Rapids Catholic Central golfer hits an approach during Friday’s first round at The Meadows. (Middle) Cheboygan’s PJ Maybank holds up his champions sign after shooting one of the lowest rounds in Finals history. (Click for more from High School Sports Scene.)