After placing runners-up at the Lower Peninsula Division 1 Finals the past two years to Detroit Catholic Central, the Blue Devils finally broke through Saturday at The Meadows at Grand Valley State and captured the program’s first MHSAA championship.

Grosse Pointe South fired back-to-back rounds over the weekend of 299 for a 598 total. The Blue Devils finished 19 strokes ahead of runner-up Rockford, which shot 617.

“They were so self-motivated and self-driven to take it to that next level,” Blue Devils coach Rob McIntyre said. “They were sick and tired of coming close, and they took it upon themselves to really drive that one extra step. I’m really proud of how they went out there and performed.”

Grosse Pointe South senior Patrick Sullivan was the catalyst in the win and earned an individual Finals title while also gaining redemption.

“We came here my sophomore year, and we lost by a few strokes and I played horrible,” said Sullivan, who will play at the University of Michigan in the fall. “I don’t even think my score counted the second day. So just to come back for the team and win, and for me to win individually is just a bonus.”

Sullivan was in trouble on the first playoff hole after his second shot flew over the green. However, he got up-and-down to force an extra hole and won it with a two-putt par.

“My adrenaline was clearly going on the second shot to get there, but my lie was pretty good,” he said. “I took a big swing, and it worked out. Two-footers the last two holes felt like 20 feet, but they got the job done. I putted well the past couple days, and that was the difference.”

“It was good to come back and play well, and I thought I had a really good game plan coming into the week,” Dales said. “I hit my irons really well, and that gave me some birdie opportunities and kept big scores out of the way. I made a lot of really clutch putts, especially on that playoff hole.” 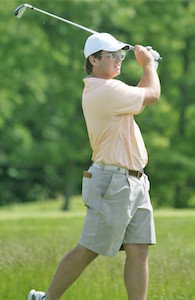 Grosse Pointe South junior Coalter Smith also finished among the top 10, in a tie for third with a 148 total.

“We’ve been practicing a lot to not hoist the second-place trophy, and it feels really good,” Smith said. “This has been building year after year, and we’ve played like this all year. We’ve all been able to play pretty well and shoot in the low to mid 70s.

McIntyre knew this team had the makings of one that could reverse the trend of near misses.

“This was the end goal, and we knew from the beginning that this was our potential,” he said. “I don’t want to say it was state championship or nothing, but I’m very proud of the scores they put up that led us to a state championship.”

Rockford’s runner-up effort was its highest finish at the Finals in school history.

Junior Kevin Healy led the Rams with a 146 total after a pair of 73s and placed second overall.

“Give credit to Grosse Pointe South because they are a phenomenal team,” Rockford coach Joel Siegel said. “They definitely played awesome, and our guys played awesome. I knew we had a lot of potential this year and were just searching for consistent four and five guys.

“This is where I thought we would be, and it’s going to be really fun to see what happens next year returning most of our guys from (this) year.”

Entering Saturday, the Rams were among six teams separated by five strokes or fewer behind Grosse Pointe South.

“Our last couple holes on Friday were 12, 13 and 14, and we played those absolutely terrible,” Siegel said. “Our van ride home was focusing on how we could dial in on those holes because we knew they would be important coming in, and ironically though, they were. We were able to get through them just fine.”

Utica Ford’s Owen Tucci shot the lowest score of the Finals, firing a 5-under 67 on Saturday after shooting 81 for the first round. He finished in a tie for third at 148.