The first gift came from his team, which brought home Hackett’s third MHSAA championship in the past five seasons at Saturday’s MHSAA Lower Peninsula Division 4 Final.

The Fighting Irish dominated from the start, surging to a 10-stroke lead after Friday’s opening round and extending it further Saturday, finishing with consecutive rounds of 300 for a 600 total, 21 strokes better than second-place Saginaw Nouvel.

“We’ve been fortunate, and we’ve had a good group of kids come through here in recent years and they’ve been successful,” said Rider, who was still drying off after a celebratory dousing of water from his players. “Our goal was to win a state championship, and what a way to go out.”

The next early Father’s Day present came from his own son, Ted Rider, who won a two-man playoff on the second hole to repeat as Division 4 medalist.

Ted Rider opened with a 1-over 73 on Friday, then shot the round of his life to get into the playoff – a 3-under par 69 – for a 142 total. That equaled individual qualifier Zack Bialik of Manistee Catholic Central, a senior who shot back-to-back 1-under par rounds of 71. 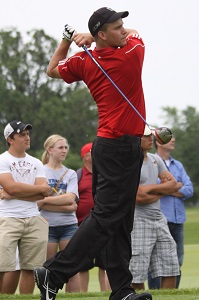 Rider won on the second playoff hole when Bialik’s par putt just burned the edge of the cup.

"I honestly wasn’t thinking about the individual part of it at all this weekend,” said Ted Rider, who finished second at the Final as a sophomore before winning it the past two years. “It’s just so great to win the team state in my senior year. I’ve never been in a playoff at the state finals, so winning that was like icing on the cake.”

Coach Rider acknowledged his team will be hard-pressed to “three-peat” next spring, as he will be losing the top four players off of this year’s team – three of whom finished among the Top 10 individually Saturday.

In addition to Rider, Hackett junior Colin Joseph finished third overall after back-to-back rounds of even-par 72. Joseph will not be back with the Irish next year as his family is moving to Ohio.

Finishing ninth for Hackett was senior Luke Stull, who shot rounds of 73 and 75. Senior Spencer Walter (166) and sophomore Joe Wenzel (168) completed the scoring for the Irish.

After posing for some unique team pictures, including a cheerleader-like pyramid, Coach Rider reflected on an amazing five-year run, which now features three MHSAA championships and a runner-up finish a year ago to Lake Leelanau St. Mary.

“These kids love to play golf together. They push each other, but they love each other,” said Rider, who also coached his older son, Jack, on the Hackett championship teams of 2009 and 2010; he now plays for Grand Valley State’s golf team. “This has been a very special run.”

Coach Rider also has not decided whether he will bring back the Kelly green shorts, complete with white shamrocks, which one of the parents located earlier this month and his team and coaches wore on Friday and Saturday.

“I’m thinking we’ll probably retire the shorts, but I’m not sure; we played pretty well in them,” Rider said.

Schiller shot consecutive 73s to finish fifth overall and Ludka, who had the low round on Friday with a 70 before falling back to a 77 on Saturday, placed sixth. The Panthers were unable to make a move on Hackett, with only one other score in the 70s.

Suttons Bay, New Lothrop and Fowler all struggled in Friday’s opening round and then played much better on Saturday to secure top-five team finishes.

Suttons Bay, which entered the Final ranked No. 2, wound up third after shooting 322 on Friday and 308 on Saturday. Senior Sean Lammy led the resurgence, bouncing back from a 76 with a 71 on Saturday, second only to Ted Rider’s 69, to finish tied for sixth individually.

New Lothrop did not have a single player in the Top 10, but locked up its fourth-place team finish by shaving six strokes off Friday’s score.

Fowler, paced by the steady play of junior Austin Feldpausch (74-73-147) was five shots better on Saturday than on Friday to hold off Pentwater for fifth place.

Other individuals placing in the Top 10 were Eau Claire senior Andy Vanderburg (145) who took sixth, and Petersburg-Summerfield senior Wyatt Spalding (148), who tied for ninth.