NORWAY — About a month ago, there was some doubt whether Hancock High School would have a golf season this year.

The Copper Country was getting hit with heavy snowfall in April and early May, and area athletic directors were forced to consider cancelling the season.

Mother Nature, however, finally gave the Keweenaw Peninsula a break and the Portage Lake Golf Course in Houghton opened on May 14.

“We literally got one practice in on our home course (Portage Lake) and it was out the door,” Hancock coach Joe Gervais said. “We started our season on May 15.”

The Bulldogs then made up for lost time and were rewarded Wednesday with their first victory this season, which just happened to be the MHSAA Upper Peninsula Division 2 championship.

For Hancock, this marked a 22-stroke improvement from its opener, also at Oak Crest. 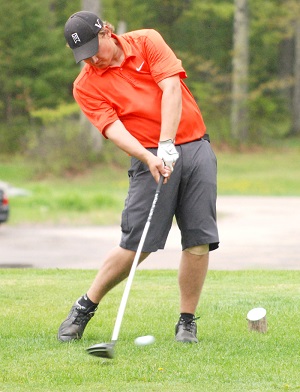 “With the season being compressed, we wanted to get a little better with each meet,” Gervais said. “Norway has a nice golf team. But we knew if we played the way we’re capable, we could give them a run for their money.

“One of the keys is our third through fifth golfers brought their scores down 4-5 strokes. This group is very dedicated. We’d get back from a meet and the kids would go to our home course and shoot another round. We’re very pleasantly surprised by today’s events, especially considering how well Norway had been playing.”

L’Anse junior Tristen Leaf was medalist with a 74, including a 36 on the back nine.

“I’m very happy with my putting today, and my drives were solid,” said Leaf, who recorded three eagles and five bogeys. “I’ve been catching up with my game. Last week, I shot an 84 in the West-Pac Conference meet at Portage where I didn’t hit the ball well at all. I worked on my drives a lot this year, and it paid off.”

“I just tried to get on the course as much as possible and work on my short game,” Hauswirth said. “The weather was better, too. We had a lot of meets called off this year, which was kind of disappointing because we could see the other teams were having a season. We usually have five conference meets for awards. This year we had three in our conference and only one for awards. It was a relief to finally get some meets in. This is definitely a nice finish, especially considering this is our first win this season.”

Hansen hit an eagle on the ninth hole, sinking a 150-foot putt to take a one-stroke lead at the midway point. He finished at 37 on the front nine, then faded to 40 on the back.

“I was really fired up when I got that eagle,” Hansen said. “Then, I didn’t do things too well on the back nine. I popped up my head too soon rather than keeping it down during my shots, which is one of the classic mental errors. I finally started keeping my head down on the last three holes and parred each one.

“We had a real good team this year. We just wanted to win this for our seniors (Mike Zygiel and Bo Brew) so bad. Our fourth and fifth guys did everything they could. It hurts a little right to come up a stroke short.”