EAST LANSING – It was fitting that the Lower Peninsula Division 3 Boys Golf Finals took place on the same day as the 150th running of the Belmont Stakes horse race, because Hanover-Horton and Big Rapids had a photo finish.

The two were tied after Friday’s first day at Forest Akers West with identical scores of 321, and then walked in from the course after Saturday’s second round having each shot scores of 330 to finish with a final total of 651.

So the figurative photo finish was the fifth-golfer tiebreaker, and that went the way of Hanover-Horton, which won its first MHSAA boys golf title since 1993.

“Mother Nature had a lot to say about today,” Hanover-Horton coach Mike Brockie said after watching his team survive a day full of rain, adding that what helped his team was that it played in a tournament at Forest Akers West about a month under weather conditions that were just as poor with a steady rain all day.

“You had casual water on the greens,” Brockie said. “My boys are somewhat mudders. I have a couple mudders, and I have a couple that would prefer not to play in this. But I tell my kids that you have to turn this weather into an asset, and I had three kids that did.”

Ultimately, it was Rod’s 89 that proved the difference, as that total was two shots better than the 91 shot by Big Rapids’ fifth golfer. 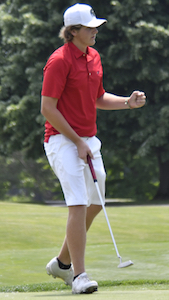 The Cardinals were led by junior Pierce Morrissey, a Michigan State-committed recruit who won the medalist honor with a final total of 147 (70-77).

In 2008, Big Rapids won the Division 3 title via the fifth-golfer tiebreaker, but was on the other side 10 years later.

“We played (Hanover-Horton) a couple of different times, and it has always been tight,” Big Rapids coach Mark Posey said. “You play in tournaments like this, and you know every stroke is going to count.”

Posey said there were no weather-related instructions that needed to be given to his team before Saturday’s play started.

“You are playing Michigan golf, and you get that experience playing in all sorts of weather, especially being from Northern Michigan. “My boys were prepared and ready to go. They knew they had to take their time and be patient. I’m really proud of the way that they hung in there today. They really fought their way through out there and didn’t give away any strokes. They kept at it.”

Grosse Ile was third with a 660, Grand Rapids South Christian shot a 669 to finish fourth, and Jackson Lumen Christi and Grand Rapids West Catholic tied for fifth with a 673.

PHOTOS: (Top) Hanover-Horton’s Brody Spink watches one of his drives during Friday’s first round of the LP Division 3 Final. (Middle) Big Rapids’ Pierce Morrissey pumps a fist after making a putt. (Click to see more from HighSchoolSportsScene.com.)