CHAMPION – With a strong golf game that can travel just about anywhere and a top three as strong as any in the Upper Peninsula, it wasn't hard to understand how Houghton secured an MHSAA Division 1 U.P. Finals three-peat Thursday at Wawonowin Country Club.

Whereas the Gremlins' closest competitors struggled mightily on certain holes, Houghton stayed consistent as it has all season, despite windy conditions, and retained the title with a 317 score, 10 strokes better than runner-up Negaunee.

The Miners had their share of advantages this go-around, playing on their home course. And while they celebrated top golfer Carter Mason earning medalist honors with an even-par 72, Houghton's overall depth proved stronger and its golfers able to translate their games to a not-so-familiar course.

"Going into the year, we didn't know what we'd have in the back end of our rotation," said Gremlins coach Corey Markham. "We knew our top three were real strong, but our four and five golfers – George Butvilas and Ben Strong – really came up big for us. They came on strong as the year went on, and they proved to be very important in today's score."

The Gremlins were led by third-place Gunnar Stein, who shot an impressive two-over 74, especially given a two-hole string on the back nine. Stein struggled on holes 14 and 15, taking a six on 14 and a seven on 15 after losing a ball in the water. The two holes pushed him out of the medalist spot despite a double bogey free day on the other 16 holes.

"Gunnar had it under par for a while, but he had a triple bogey on 14," said Markham. "To keep your head straight and come through that is tough to do, but he did just that. It's a testament to his golf ability, and his mental state."

Mason had no such problems. Playing the course where his family has had a membership for the last decade, he avoided big mistakes and was the lone golfer to come in at par. Kingsford's Dylan Dalsanto was runner-up with a 73.

"My putting was the best part of my game today," said Mason. "I started off with three bogeys in the first five holes, but then I came back with birdies on 6, 7, 10 and 16.

"On 15 (which has water), I played the tee shot safe with the 3-wood, and stayed short of the water."

Last year at Pine Grove, Mason was far back from the leaders, shooting in the mid 80s. The double-digit improvement was validation of his work during the summer. 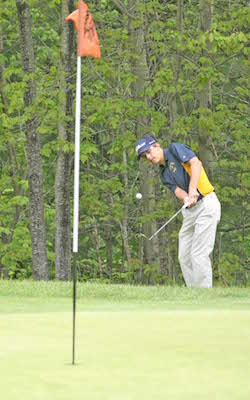 "Last summer, I played almost every day," Mason said. "I started hitting my irons a lot better and making a lot more putts this year. My putting has definitely improved.

"There were a few holes that could have been improved today, but it was pretty good," Mason added.

Gremlins senior Wyatt Liston placed fourth overall with a 75, followed by Bryce Douglas of Gladstone and Nathan Rousseau of Escanaba, both with 81s.

Negaunee's runner-up team finish was a pleasant surprise for Mason. The Miners have played second fiddle to Escanaba and Gladstone at most events this year. Escanaba's top golfers struggled on a number of holes, resulting in a third place team score that was slightly disappointing, though coach Brian Robinette was pleased with the effort.

"Wawonowin is a course that demands that you're on with your golf swing, on with your short game, on with the mental portion of things," Robinette said. "You have to be able to pick yourself up and dust yourself off after a double bogey. You need to keep your emotions in check.

"Our five boys went down swinging, and I'm proud of the way they handled themselves. They put a lot of pressure on themselves, as all competitors do. The looks on their faces tell me everything I need to know."

The Gremlins will lose Liston, who with his sophomore sister Kaaren on the girls team made a formidable tandem for Houghton golf over two seasons.

"The Listons are an awesome golf family," said Markham. "They just live for golf. They're very talented.

"It's going to be sad to see Wyatt leave, but he won his share of U.P. championships as a team at Houghton. Kaaren is only a sophomore, and such a good solid golfer. We're looking for two more good years out of her."

Negaunee, on the other hand, had no seniors this year. Led by Mason, who will be a senior next season, the Miners will be on the watch list for a Division 1 title.

"We're going to have the same exact team next year," said Mason. "We should improve over the summer, and we'll have a good chance to win next year. We'll see how that goes."