FRANKENMUTH – After 18 years of dreaming about this moment as head coach of the Lake Orion boys golf program, the reality obviously turned out to be even better for Monty Gallaher.

Since taking over the program, there have been tears over not being able to qualify for the Finals despite playing Regionals on the home course, years with disappointing finishes when his team had qualified for the championship tournament, or simply years when there wasn’t enough talent to win much of anything.

But the only tears Gallaher and the rest of Lake Orion’s team shed after the Lower Peninsula Division 1 tournament at The Fortress in Frankenmuth on Saturday were tears of joy after the Dragons captured their first MHSAA Finals title.

Lake Orion finished with a two-day score of 606, 11 shots better than the 617 put up by runner-up Grosse Pointe South.

Rockford was third at 621, Detroit Catholic Central shot a 623 to finish fourth and Hartland was fifth with a 624.

“I just feel a little numb right now,” Gallaher said. “I’ve known we can do this. We’re a great team. But finally seeing it happen, it’s winner winner, chicken dinner here in Frankenmuth.”

The Dragons took a 10-shot lead after posting a 294 for Friday’s first round, and actually were 18 strokes worse as a team on the second day.

But other than Grosse Pointe South, no other team was noticeably better to the degree needed to catch Lake Orion.

South entered the day 23 shots behind Lake Orion, a gap that was too much to overcome despite its better play during the second round.

But the reigning champion rallied to earn another runner-up finish, its third in four years to go with the title won last year. 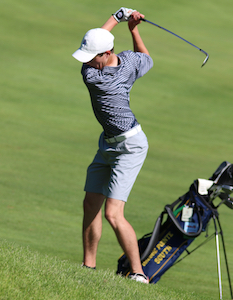 “One of the things I stressed is that if you’re making good choices, there’s no regrets,” Grosse Pointe South head coach Rob McIntyre said. “Good choices lead to no regrets. They went out there and made some good choices today.”

Even better for Lake Orion was that it celebrated the individual champion as well after junior Justin Sui defeated Grosse Pointe South senior Coalter Smith in a playoff after each shot two-day scores of 141 (71-70).

After each parred the par-5 10th hole, Sui sank a 10-foot putt for par on the par-4, 9th hole to clinch the title as Smith was lining up a 6-footer for bogey that would have potentially forced a third playoff hole if Sui missed.

“I was really excited,” Sui said of his mindset going into the playoff. “I had the adrenaline rushing, and everyone was watching. The team was cheering me on. It felt great. I feel like I played better during the playoff than normal.”

Lake Orion senior Drew Coble flanked Sui by finishing in a tie for fourth with a two-day total of 145 (70-75).

Gallaher said having to sleep on a 10-shot lead after the first night wasn’t too nerve-racking for his team, mainly because the Dragons kept as normal a routine as possible.

Instead of staying at a hotel in Frankenmuth, the team drove back home after Friday’s round, with Remer actually attending the school’s prom Friday night.

“I made the executive decision to sleep in our own beds,” Gallaher said. “We do all kinds of tournaments in southern Ohio and northern Michigan, where we stayed over and we didn’t play great. That was a determining factor. We didn’t win those tournaments and I said, “That’s what we are here to do, to win this tournament.’”

PHOTOS: (Top) Lake Orion got out to a 10-stroke lead during Friday’s first round at The Fortress. (Middle) Grosse Pointe South made a run at the title Saturday, finishing second for the weekend. (Click to see more from HighSchoolSportsScene.com.)