EAST LANSING – Adam Elias is the epitome of a team player at Lansing Catholic, where MHSAA golf championships, both boys and girls, have been the norm for the past five seasons.

The Cougars boys chalked up their third straight title Saturday afternoon at Forest Akers West, even though their senior leader did not have one of his best days.

But despite shooting 83, Elias was all smiles while clutching the team trophy and posing for victory photos.

“Not my best day (83), but in the end it didn’t really matter,” said Elias, whose team posted a 12-shot victory, 623-635, over runner-up Ludington. “The goal was to win the title, get our third straight championship. In the end, I’m really proud of the way my team played.”

“We had some nerves at the beginning of the round,” said first-year Lansing Catholic coach Kim Johnson, “but the boys settled themselves down and tried to keep the boat steady.”

Jackson Lumen Christi, second to Lansing Catholic in 2013 and 2014 and a four-time champion from 2009-12, finished third behind the Cougars and Ludington at 653, one stroke ahead of Flint Powers. Manistee rounded out the top five at 658. 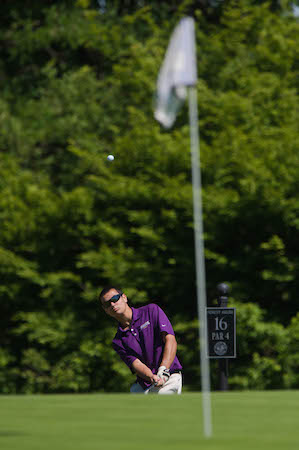 “We talked about the champion mindset at the beginning of the season, and I could see that they started to adapt some of those techniques,” said Johnson. “You could tell that they were thinking positive thoughts and always looking toward the next shot.”

The championship three-peat is one moment that Elias won’t soon forget.

“We had a rough start to the season but we worked through it,” he said. “This is huge. I could not be more proud of my team.”

PHOTO: Lansing Catholic poses with its MHSAA championship trophy after winning its third straight title. (Middle) A player at the Lower Peninsula Division 3 Final hits an approach shot during the weekend. (Click to see more from HighSchoolSportsScene.com).