“It’s just been a really good season,” said Panthers coach Erik Crowley. “It’s not a very long season up here, so we made really good time of the work we were able to do. We saw a lot of improvement from the team. Just a really fortunate season. (We had) lots of good kids, and they all improved a lot.”

The runner-up finish was the highest in North Central’s Finals history on the golf course.

“Spring sports are a difficult time because of weather and sharing athletes with other sports,” said North Central coach Gerald Whitens. “I am so proud of our boys and girls teams for their efforts preparing for this tournament.”

Mercier also was the Division 3 champion as a freshman in 2019 before COVID-19 forced last season to be canceled.

“It’s always nice to get a win,” Mercier said. “I left a couple shots out there, but overall, I played pretty well. (Tomas Immonen), who took second, he played a really good round today. I thought he did very well.” 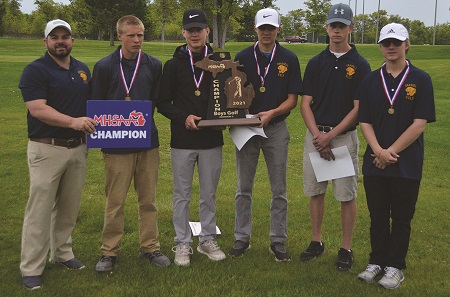 The win, Mercier said, wasn’t without its challenges

“The course played pretty tough with the wind,” he said. “I thought I bounced back from a couple bad shots and am pretty happy with how I played.

Whitens spoke highly of Mercier’s performance and overall attitude toward the game and school.

“We are led by the top golfer in the U.P., and his score supports that,” he said. “Bryson is an extremely dedicated young man, whether it's academics or sports. Bryson has always put forth the effort to be the best he can be.

“I have had the pleasure of watching him grow up with a golf club in his hand and driving around with his dad on a golf course for hours every day since he was able to walk. I am so proud of him and the way he carries himself on and off the course.”

Immonen, in his final golf event, shot a personal best at 75.

“Just to say that I can be somewhat close to (Mercier) is pretty good,” said Immonen. “He usually beats me pretty bad every meet, so it was nice to come out here and shoot 75.”

Cedarville’s Jay Freel and Chassell’s Dean Pietila tied for third individually at 84. Chassell’s team championship was its second in the sport, with the first coming in 1995. The Panthers also finished Division 3 runners-up in 2011.

“It feels good to finally accomplish something after putting in long hours at the golf course,” said Pietila. “Things got a little rough right off the start. I bogeyed a par-three I shouldn't have. Once all the nerves left, then I started settling in and playing golf.”

PHOTOS: (Top) North Central’s Bryson Mercier putts during his Division 3 championship round Thursday. (Middle) Chassell poses with its first Finals winner’s trophy in the sport since 1995. (Photos by Todd Rose.)