After all, it’s hard to imagine many better scores being turned in if there had been perfect weather on the second day of the Lower Peninsula Division 4 Boys Golf Finals at Forest Akers East.

Fahlen shot a great score during Friday’s first round, firing a 71, but did even better amid far more miserable conditions during the second and final day.

The steady rain was no hindrance to Fahlen, who shot a 5-under par score of 67 to win the medalist honor.

More importantly to Fahlen, it wasn’t the only first-place prize he got his hands on.

It all started with Fahlen, who said he never had shot a score that low in rain before.

“Rain is always a battle keeping all your stuff dry,” he said. “It’s always hard to keep focus, and that was the important thing for today. In Florida weather I’ve shot this score, but not in Michigan rain.”

Fahlen had six birdies and one bogey on Saturday, finishing three strokes overall ahead of Thomas Hursey of Suttons Bay (67-74-141). 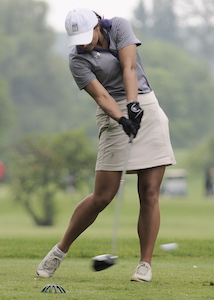 For NorthPointe Christian, it was a culmination of a year’s worth of anticipation after they left Forest Akers East with the runner-up trophy last year, but knowing every single golfer in its lineup was coming back.

“As soon as we left, we said we have to come back next year and tear it up,” Fahlen said. “All year long, that was on our team’s mind. That was our goal the whole season, to work hard for this exact day. We came out and accomplished it.”

NorthPointe Christian coach Erik Fahlen, Sr., said his squad shot its best 36-hole score at the tournament “by a lot.”

“It was a great day,” Fahlen, Sr. said. “The kids handled the rain well today. The kids came ready to play.”

Everest Collegiate entered the day just six shots behind NorthPointe Christian and saw Mitch Lowney shoot a 70 to finish with a two-day total of 145.

But NorthPointe Christian had too much depth for anyone else to compete with this time.

“You can’t win on the first day but you can lose on the first day, and we didn’t,” Everest Collegiate coach David Smith said. “We kept ourselves close. We thought that would send a little message, but it didn’t. They kept firing bullets, and we couldn’t do anything about it.”

Colin Sikkenga led the way for Kalamazoo Christian with a final total of 143 (72-71) to tie for third individually with Clinton’s Austin Fauser.