Thomson, a senior, shot a 77 to take home medalist.

"The greens were really fast today, faster than I have ever seen here," said Thomson. "I play here almost every single day. But it's awesome to win U.P.'s here."

It was also a blustery day at times, which Thomson noted came up in spurts.

"There was a point on hole 11, where I could see the ball moving on the green because of the wind, as I was waiting to putt," Thomson added. 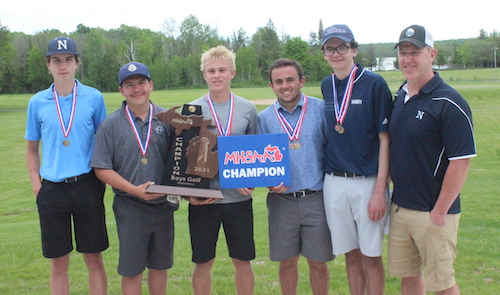 Norway took home the team title by a significant margin over runner-up Hancock, 328-357, with four Knights finishing among the top seven individuals including runner-up Jeffrey VanHolla with a 78.

The team title was Norway’s fourth and first since 1988. The Knights had finished Division 2 runners-up six of the last eight seasons, including back-to-back to West Iron County in both 2018 and 2019.

Evan Anderson shot an 80 to finish third, followed by Drew Anderson with an 84 in fifth and Carson Chartier with an 86 for seventh. Tyler Parker with a 105 rounded out Norway's lineup on the day.

Two years ago (before COVID-19 caused last season to be canceled), Drew Anderson was second and VanHolla and Thomson tied for third at the Division 2 Final which also was at George Young.

"I don't know what else was different here today besides the fast greens, but I usually shoot lower scores here, especially the last two rounds I played here before today," said Drew Anderson, a junior this season.

Fourth place among individuals went to Mason Mikesch of Hancock with an 81. Finishing in sixth place was Jeff Starzynski of Stephenson with an 85, and Justin Carrick of Brimley and Ricky Brown of Iron Mountain tied for eighth place with 87s. Chad Nordstrom of Hancock and Josh Magnusen of Newberry tied for 10th with 90s.

On the team side, Brimley was third with a 382. The next three teams were separated by two strokes – St. Ignace fourth at 405, Iron Mountain fifth at 406 and Pickford seven carding a 407.