FRANKENMUTH – Ann Arbor Greenhills senior Cale Piedmonte-Lang had one objective in mind, but ultimately he couldn’t have been happier that he did NOT achieve it.

Stepping up to the par-5, 529-yard 18th hole at The Fortress during the second and final day of the Lower Peninsula Division 3 Boys Golf Final, Piedmonte-Lang was tied individually with Grand Rapids Catholic Central’s Will Preston after recording a birdie on the par-3, 17th hole.

Piedmonte-Lang had one goal for the 18th: Get a par and into a playoff for the individual title.

“I hit iron off of the tee,” Piedmonte-Lang said.

After hitting iron off the tee, iron with his second shot and then a wedge to the green, Piedmonte-Lang found himself with roughly 25-foot putt for birdie that seemed like it was akin to putting down a steep hill of concrete.

Lo and behold, the ball ended up not only trickling toward the hole, but in it for a birdie that gave Piedmonte-Lang a one-shot win individually with a two-day total of 143 (72-71).

“It shocked me a little,” Piedmonte-Lang said. “I thought it was short at first, but it kept going. It was kind of surreal.” 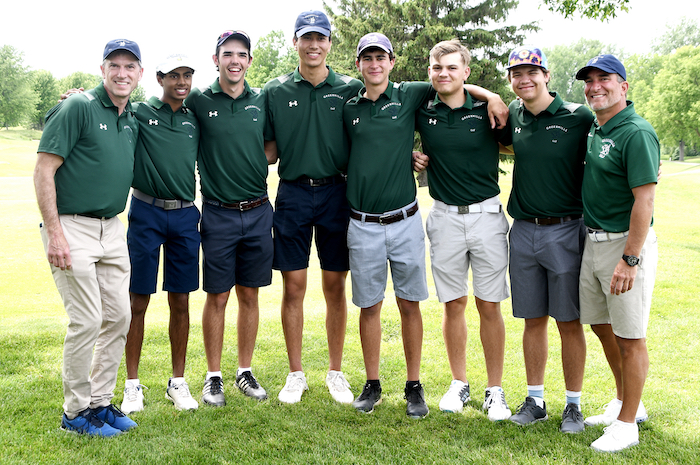 Even more surreal was that Piedmonte-Lang also got to celebrate a team title with the rest of the Gryphons, who easily captured their first state championship in boys golf since winning the Class D title in 1994.

Greenhills finished with a two-day score of 612 (306-306), which was 20 shots ahead of runner-up Grand Rapids Catholic Central.

Piedmont-Lang had plenty of support, with senior Beau Brewer finishing fifth individually with a 150 (71-79) and sophomore Max Shulman finishing sixth at 152 (76-76) for a Greenhills team that was ranked No. 1 in the state going in.

“We got bounced early last year (in Regionals),” Greenhills head coach Michael Karr said. “We didn’t focus too much on it because we didn’t want to bring up bad feelings from last year, but we were definitely motivated this year to go further. It’s not often you have the firepower and talent to win a state title, so you want to take advantage when you’ve got the guys who are that talented to do it.”

Karr said his team got some familiarity with The Fortress when it competed in and won a tournament on the course back in April.

The team shot a 313 that day, and obviously seemed to like playing the course during the MHSAA Tournament.

The Gryphons shot a 306 on Friday to take a 10-shot lead over Traverse City Francis going into the second day, and the message from Karr was clear going into Saturday’s final round.

Despite windier conditions on Saturday, Greenhills left no doubt as a team, and all that was left at the end was to see if Piedmont-Lang could win the individual title.

Karr said he told Piedmont-Lang before the 17th hole how things stood, and then camped himself underneath a tree near the 18th green as Piedmont-Lang stood over his birdie attempt.

“Obviously he took the time to read his putt and read it correctly,” Karr said.

As a result, it was the ultimately storybook ending for Piedmont-Lang and Greenhills.

“A putt like that to win it is really something special,” Piedmont-Lang said.

PHOTOS (Top) Greenhills’ Cale Piedmonte-Lang, left, and GRCC’s Will Preston shake hands at the end of Saturday’s Division 3 Final at The Fortress. (Middle) Piedmonte-Lang also celebrated the team championship with the Gryphons. (Click for more from High School Sports Scene.)