But the fourth-year coach had good reason to feel emotional. Her first class of seniors on the St. Ignace boys golf team had just won the Upper Peninsula Division 2 Final title at George Young Golf Course.

Having coached them since their freshman year, Brown said the team overcame a challenging course for the win, highlighted by Carter Tallaire’s 80. St. Ignace’s 336 edged Iron River West Iron County (346) for the title.

“It was a very good day. They worked hard,” Brown said before pausing and choking back tears. “We had some struggles this season. We had some issues with some kids, so we had to change things up before we came. But they pulled it off, and they came through. I have three seniors this year, and it’s going to be hard to let them go. They’re pretty special. It’s good.”

West Iron County coach Mark Martini said he was impressed by St. Ignace’s ability to navigate the course. His team had played George Young every day the previous week, and the greens played differently each time.

“I thought that St. Ignace played really well for the conditions with the spring we’ve had,” Martini said. “My guys, for the most part, freshmen and a sophomore; I thought that was a good finish for us placing second. The scores were really quite good for all the situations that we’ve had all year weather-wise.”

Brown said the course presented unique challenges, given that her team last played it as freshmen, and the team also traveled four and a half hours prior to competing. She listed off the features of the course that made it difficult for her team.

“Just the greens are fast, pin placement, keeping it straight,” Brown said. “It gets a little narrow on a couple holes. Dog legs are a little challenging at times, some water holes.”

Yet Tallaire’s 80 just edged an 82 by Norway’s Brad Schalow and West Iron County’s Noah Thomson. Tallaire said he struggled with his short game throughout the day.

“It was a little rough. I didn’t putt too well, and I didn’t hit as many fairways as I wanted to either,” Tallaire said. “For the most part, the course played well too; it was nice. I’ve played very well before today. I shot three or four rounds under 80. It’s a tough golf course. It plays long, it plays nice, it was difficult. I’ll take an 80 for how I was playing. 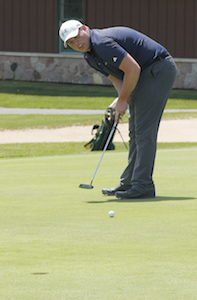 Kody Rickley placed fourth for St. Ignace with an 83, and teammate Andy Metz was sixth with an 85.

Trevor Tchida’s 86 paced Hancock, which did not qualify for a team score.

Brown said part of the challenge for teams is coming from smaller courses that they frequently play to compete for a U.P. title at a course not only bigger, but more demanding in various ways. But the team was confident coming into the day, she said.

“We come from a little nine-hole course, so it’s hard, but it’s a great challenge,” Brown said. “We go down and golf in Gaylord a lot, and this year even West Branch. They get a lot of experience playing the tougher courses, so I think that helps us prepare for the UPs.”

PHOTOS: (Top) A player tees off during the Upper Peninsula Division 2 Finals on Thursday. (Middle) Norway’s Brad Schalow sends a putt on the way to finishing individual runner-up. (Photos by Adam Niemi.)