BIG RAPIDS – After coming up three strokes short of an MHSAA title last season, the seniors on the Jackson Lumen Christi boys golf team were determined to leave Big Rapids with a championship trophy this weekend.

That determination was put to the test on both days of the Lower Peninsula Division 3 Final at Katke Golf Course, home of the Ferris State University golf teams. Turning in strong scores on the back nine both Friday and Saturday, Lumen Christi finished with a two-day total of 639 strokes. Hometown contender Big Rapids took the runner-up trophy with a 647 while Grand Rapids West Catholic, a team featuring three sets of twins, placed third with a 659.

The road to the title was anything but easy for Lumen Christi. While the Titans returned four seniors from last year’s runner-up squad, they faced challenges from the beginning of the season through their final holes of this spring.

Senior Logan Anuszkiewicz led the way for the Titans as he shot rounds of 75 and 78 to finish in a tie for third individually with a 153 total. The team title was the first since 2012 for Lumen Christi, and for this group of seniors it was a goal they’d had since entering high school.

“It’s been a long time coming,” Anuszkiewicz said. “Four years in a row we’ve been close, and finally we did it.”

Fellow senior Phil Stuart was a testament to Lumen Christi’s tenacity. Stuart carded rounds of 81 and 82, but the scores were hard-earned.

“I shot a nine on number one (a par four) today so I didn’t start out strong,” Stuart said. “I wasn’t about to give up, so I kept grinding for the team. We really wanted this, so we all just kept grinding.”

One of Lumen Christi’s biggest obstacles came shortly before the season began when Luke Girodat, the Titans’ number one golfer, was hit by illness.

“Luke, our number one player, came down with mononucleosis before the season, and that put a crimp in things,” Swartout said. “He shot an 83 and an 84 for us this weekend, and that was with him feeling about 70 percent. He just never quit and kept grinding.”

“We just wanted this, that was it,” Girodat said. “We lost last year when we couldn’t finish on the back nine, and we were not going to have that happen this year.”

Senior Riley Hestwood turned in rounds of 85 and 81, believing all the time in his coach and teammates.

“Coach told us to keep going and keep grinding it out,” Hestwood said. “We believed in each other and our team and just kept grinding.”

Big Rapids, playing in the shadow of its high school just up the road, improved on a third-place finish from last year and also provided itself with a tangible goal heading into next season as the team will graduate just one player. 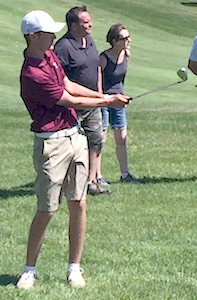 “First off, congratulations to Lumen Christi,” said Big Rapids coach Mark Posey. “They played two good days of golf. It always hurts and stings for a while, but we hope to move up one more spot next year. We have four guys coming back for next year.”

Tait Morrissey, that lone senior, fired rounds of 79 and 85.

“We sent Tait out with a second this year after a third last year,” Posey said.

Sophomore Pierce Morrissey finished in a tie for fifth individually with rounds of 77 on both days for a 154 total.

Charlevoix senior Matt Good came away with the individual medalist honor. Like the Lumen Christi team, Good needed to grind it out both days plus one additional hole as he and Tawas junior Daniel Shattuck both carded 150s for the tournament, forcing a playoff.

On the first hole of the playoff, both Good and Shattuck reached the green in three strokes. However, Good had a 4-foot putt while Shattuck faced roughly a 30-footer. Shattuck two-putted the hole and Good drained his on the first try to win the individual title.

“I just focused on my breathing and making good swings,” Good said. “I put in a lot of hard work, and it paid off.”

That hard work included countless hours working on short putts like the one that won him the title.

“I’ve spent thousands of hours dropping down a chalk line and practicing those 4-footers,” Good said.

He was two strokes off the lead heading into Saturday and started the final 18 slow, but came on strong on the back nine.

“I struggled at the start today,” Good said. “I started with a double and then bogeyed the next hole. I just kept grinding and trying to hang in there all day. I just tried to hang in there both days.”

For Good, hanging in there has been the story of his high school career, as he returned to the Finals this season for the first time since his freshman year.

“I struggled the last two years,” Good said. “I worked real hard over the offseason, and I had some really big goals this year and I achieved every one of them.”