TRAVERSE CITY – When Todd Hursey talks about all the MHSAA Finals golf champions that have come out of the Traverse City area in recent years, he cites one common denominator.

The Traverse City Junior Golf Association, started more than three decades ago by one of the area's most respected high school coaches to promote the game and provide local school programs with more skilled golfers.

“For the most part, it’s been accomplished with a steady (flow) of TCJGA kids,” the Suttons Bay coach and TCJGA executive director said of the area's recent success.

And what ties it all together is that almost all of those players have roots in the TCJGA’s summer program, now in its 33rd year.

The association’s 18-hole elite tournament division – 11 tournaments in seven weeks at 11 courses – is one of its most popular offerings, giving high school golfers a chance to develop their skills and competitive edge.

“As far as getting kids ready for tournament golf, there’s nothing better,” Traverse City West boys coach Mike Schultz said. “We definitely encourage our players to participate. It’s such a no-brainer. It’s like a summer camp where you get to compete in a tournament (every four to five days). It’s a tremendous asset for the players and the coaches.”

West has, perhaps, the best representation in the TCJGA – and it’s paid off. The boys swept league, District and Regional titles last spring. The Regional triumph was the third in four years.

The girls, with five underclassmen in the lineup, followed suit, finishing the season with the school’s first MHSAA Finals golf title. Freshman Anika Dy led the Titans, placing just one shot behind the individual winner, Brighton’s Julia Dean. All the West girls are TCJGA veterans.

“I highly encourage all my girls to play in at least three of the tournaments,” Titans coach Kristen Nolan said. “What ends up happening, though, is that most will play in five or six, if not more, because, no pun intended, I want them to get into the swing of things before fall. I want them prepped and prepared for playing in tournaments.”

Traverse City Hall of Fame coach Bob Lober helped launch the junior program in 1984 for a couple reasons – to help teach kids the sport (lessons are offered, starting for those as young as 5) and to have it act as a feeder for the high school programs. 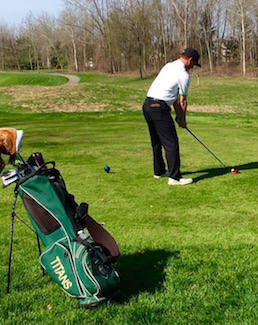 Schultz was one of the early products of the program. He took up golf as an eighth grader when his parents signed him up for lessons in the junior program. He went on to play four years of high school golf (1989-93) under Lober.

“I was destined to be an offensive lineman and this was the best way to make sure I had working knees when I turned 40,” Schultz said, laughing. “I thank my parents for getting me involved. The junior program is dear to my heart.”

Hursey has been a benefactor, too. Although he had some three-sport athletes on his golf team last season, which prevented them from playing consistently in the summer program, that was more the exception than the rule.

“With our first three state title teams we didn’t have a kid who didn’t play multiple years in TCJGA,” Hursey said. “You didn’t consider not doing it. Everybody did it.”

Hursey’s team is rebuilding this season. His son, Thomas, is the lone returner from the Suttons Bay lineup that won the 2015 title. West is minus three of its top five players off a seventh-place Finals team a year ago, but Schultz is encouraged by the early returns.

“Going off last year’s averages it wasn’t looking too promising,” he said. “But I’ve been pleasantly surprised. The guys have worked hard on their games. We’ve been consistently between 324 and 327. As we progress, and play more, it should get better.”

The Titans did do better Tuesday, posting a season-low 315 at the Cadillac Country Club.

Because of a lingering winter, West had just a couple days of practice at Mistwood Golf Course before its season-opener, a fourth-place finish in the East Lansing Invitational. West has since won the first two Big North Conference meets.

Keits Shoemaker and Austin Webb are the two returning players off last year’s squad. Shoemaker fired a 74 on Tuesday, Webb a 79.

“Keits has stepped up nicely,” Schultz said. “I’m hoping he gets more comfortable shooting in the mid-70s. Austin is going to be an integral part of this team. Three of his first four rounds have been under 80.”

Tyler Buchanan, Sam Schriber and Zach Perrin are coming on, too. Buchanan shot a 76 in the first tournament, Schriber was averaging 81 through the first three events while Zach Perrin, who did not play last year, chipped in an 81 Tuesday.

“I think these kids will continue to improve and grow,” Schultz said. “It should be a fun year.”