The sophomore simply played bombs away off the tee, pounding his drives some 280 to 300 yards with deadly accuracy over the rolling, tree-lined 5,903 yards. He posted a career-best 74 to help his Iron River West Iron County teammates capture the Upper Peninsula Division 2 boys championship.

Bociek was the medalist and finished three shots ahead of teammate Nathan Thomson, whose brother Noah was fourth with 80. Trevor Tchida of Hancock was third at 79, while Norway's Evan Anderson was fifth with 81.

Bociek also plays hockey, for Kingsford under the co-op program. He golfs from the right side but is a lefty with a hockey stick as a center. Hockey is his favorite sport.

He struggled at the start, with a string of three bogeys before getting three birdies to close out the front nine. He had two birdies and seven pars on the back.

"The first birdie (on hole 2 following par on the short dogleg left opening hole) started me off," he said. "I got into it and had a good pace the rest of the way."

While some players said the greens were slow, Bociek was happy with the speed. "I like them that way because I can hit the ball harder," he said, adding he also was solid with his approach wedge shots. 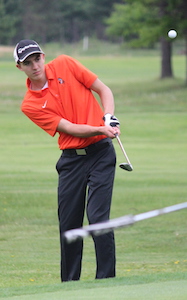 Playing at George Young Golf Course in Gaastra, south of Iron River, has been helpful to his development because its tree-lined fairways and large greens.

Bociek said he was focused on his game of golf. "I was not worrying about anybody else," he said. "I blocked everybody out and did my thing."

Bociek pointed out the Wykons have three sophomores and two freshmen, which should bode well for the future. Coach Mark Martini agreed with Bociek that the Wykons should continue to contend.

"They don't realize this opportunity doesn't come along that often in life," he said of potentially establishing a dynasty.

Martini said Wednesday's success actually began around Easter when he sent a text to his players "to get ready for the train and the U.P. and we are going to win. We talked about it all year.

"They played like this all the time. They practice well, they listen well," he added, indicating the Wykons did not use a surprising runner-up finish at the conference finals as incentive.