EAST GRAND RAPIDS – Few players get the opportunity to end a season with an MHSAA championship.

Brother Rice claimed its ninth MHSAA Finals title in a row with the victory at East Grand Rapids’ Memorial Field, and Perkovic has been a part of the last four.

He also won a pair of titles in football as a junior and this past fall. He played defensive end and tight end.

“There’s no better way of ending a season than winning a state championship,” said Perkovic, who scored three goals against FHN/E. “And since I’ve been at Brother Rice, I’ve been fortunate in more than one sport. To just end my career with a win, there’s no better feeling.”

While the Warriors have dominated the landscape since boys lacrosse became an MHSAA sport, coach Robert Ambrose said each team makes its own mark on the program.

“Every year is different, I think, and it’s not about anything behind us or in the past,” he said. “It’s all about the future, and we don’t take anything for granted. We are very humble in our approach to the game, and on any given day, especially in lacrosse, anything can happen.

Perkovic said the team doesn’t feel the pressure of continuing the program’s successful tradition each year.

Brother Rice is solely fixated on the present.

“We don’t think about that, and we try to work as hard as we can in the offseason and play a good season,” he said. “If we put our work in, then we’ll have a good chance of doing it again. We just get prepared for each season.”

The Warriors started slowly in Saturday’s Final and fell behind 3-0 in the first period.

They recovered with a superb second period, and tallied four answered goals in the final six minutes of the first half to turn a one-goal deficit into a 9-6 lead at the half.

“It’s always a tough match, especially in the state finals, and it doesn’t matter who we are playing,” Perkovic said. “Forest Hills came out flying, but we brought it back and came together offensively as a senior group.” 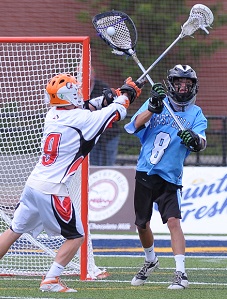 FHN/E was hoping to become the first team from Michigan to defeat Brother Rice.

“We had two goals for the whole season,” FHN/E coach Mark Lardieri said. “One was to be the first team in Michigan to beat Brother Rice in 11 years, and one was to win a state championship. We had it lined up perfectly today to do it, but we couldn’t close the door.”

FHN/E kept the game close throughout the second half, but never regained the advantage.

“I’m extremely proud of how far we came to get here,” said FHN/E senior Connor Sullivan, who scored two goals. “We had a lot of injuries and a lot of things going on this season, but we just pulled together in the playoffs and got it done to get here.”

“This was a home game for them, so we knew they were going to come out firing and they got up 3-0,” Alessi said. “But then we began to move around and get shots. I was trying to get open, and my teammates were looking for me.”

Sophomore keeper Grant Lardieri stopped 12 shots for FHN/E, which ended the season with a 15-8 record.

Sean Scadron had nine saves for Brother Rice, which finished 18-5 with all five of its losses coming against out-of-state teams.