He can be cut some slack, however. He was only in fourth grade, unable to perform an on-field role for the Rangers.

"Back in 2010, I was the water boy for them as a youngster," Clay said. "They won a state title that year. I looked up to guys like Collin Schlosser, an All-American, Chris Bosscher. I just wanted to be like them someday. It's a humbling experience looking up to them and to finally be on the level they were on."

He broke the state single-season goal-scoring record on Saturday, scoring three times for the Rangers in a 10-6 victory over rival East Grand Rapids in the MHSAA Division 2 championship game at Parker Middle School.

With 104 goals in 22 games, he eclipsed the mark of 102 set by Colin Theisen of Monroe St. Mary Catholic Central in 2015. Add that to the 81 goals he scored last season, and Clay is on pace to obliterate the state record of 276 career goals — because, you see, he's only a sophomore.

It's a fact that excites Forest Hills Central faithful and is a source of angst for rivals.

"He's an absolute animal," said Rangers junior Drew Bailey, who scored the tie-breaking goal with 8:55 left in the game. "He's hard to defend. He's physical. He finishes every shot. He's only a sophomore. He has a huge future ahead of him."

"You have to pay attention to Bryce," said East Grand Rapids coach Rick DeBlasio, whose team lost three times this season to the Rangers. "He's one of the best attack guys. Unfortunately for us, he's only a sophomore."

Clay had an instant impact when he arrived in high school because he's been playing the game longer than most teenagers. He was in first grade when he joined a youth league, playing on the same team with current teammate Patrick English and East Grand Rapids star Hub Hejna.

"I fell in love with it at an early age," said Clay, whose brother Andrew is a senior defender for the Rangers. "If you want to be good at it, you've got to start early."

Clay may be young, but he's mature enough to spread the credit for one of the greatest individual lacrosse seasons since the MHSAA began sponsoring the sport in 2005.

He was held off the scoresheet in the first half, yet the Rangers held a 3-2 lead in the lowest-scoring first half ever in an MHSAA Boys Lacrosse Final. Tanner Hallock scored the first two goals of the game off passes from Bailey, while Max Kuiper had the third goal for the Rangers. Ben Keller and Drew Poortenga scored for the Pioneers.

"They run a heavy zone, which can be tough for a player," Clay said. "But I've got great teammates who can really move the ball and play a great style of lacrosse. My success is from my teammates. I owe everything to them. We're all one big family, and we love to play with each other.

"Honestly, if I'm not having a great day, guys like Tanner Hallock, Max Kuiper, Drew Bailey, Jack Uecker can carry the team. They can get it done in crunch time."

East Grand Rapids (15-6) never led, falling behind 1-0 on Hallock's goal 3:29 into the first quarter. But the Pioneers kept battling, getting a huge momentum boost heading into the final quarter when Hejna scored with three seconds left in the third to tie the game, 5-5.

"We never got into our game," DeBlasio said. "We played way too much defense and had difficulty with transition when we had the ball. When you don't play offense, it's hard to get into a rhythm. We struggled. When we went into the fourth quarter tied with these guys, even knowing how powerful they are at scoring, I liked our chances."

Momentum can be fleeting, however, especially against an offense as dangerous as Forest Hills Central's. 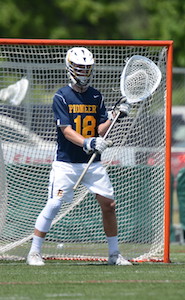 Bailey took a pass from English in front of the net and buried a low shot with 8:55 left in the game to put the Rangers ahead for good, 6-5.

"We started that quarter in a new formation, so we could get different looks," Bailey said. "I knew I was going to be open at the crease. I just had to finish my shot."

Bailey's goal ignited a three-goal outburst by the Rangers, as English scored with 5:46 left and Uecker tallied with 2:50 on the clock.

Hejna kept the issue in doubt when he completed his hat trick with 1:46 remaining, cutting Forest Hills Central's lead to 8-6.

Clay erased all doubt when he scored into an empty net with 51 seconds on the clock. Ty Collins completed the scoring with two seconds left.

Finally, the Rangers (20-2) were back on top of Division 2 lacrosse after losing to Bloomfield Hills Cranbrook Kingswood by one goal each of the last three seasons, including overtime Semifinal losses in 2014 and 2015.

"I'm fairly new to the program, so I haven't experienced the total disappointment that these kids have,” second-year Forest Hills Central coach Jake Seiler said. “They won it in '12 and were in it in '13. They've come so close, this group of seniors. They've tasted it, but they haven't won until today. I'm just excited we were able to give these seniors the championship they've been looking for since their freshman season."

Kadin Schermers made seven saves for the Rangers, while Nick Milanowski made 12 for the Pioneers.