BIRMINGHAM – First, Trent Bohrmann’s stick flew high into the air. Then his right glove, followed by his left.

Finally, Bohrmann tossed his helmet to one side before being embraced by another mohawk-shaven teammate coming toward him from the other. The senior goalie wouldn’t need his gear anymore – although it came in quite handy over the last 19 minutes of Saturday’s MHSAA Division 2 Final at Seaholm High.

That’s how long he and his Grand Rapids Forest Hills Central teammates kept Detroit Country Day scoreless in coming from three goals down to win this season’s championship, 7-6.

The Rangers scored four straight and got two key fourth-period plays from their senior in net in toppling the reigning champion Yellowjackets.

"We came together truly that last half after they got that sixth goal. We really tore it up,” Bohrmann said. “And then that last quarter was just so nerve-wracking, because you knew they were coming. You knew they were going to be taking shots. You just had to stop it.

“We’ve had a few close games this year, and in playing those games, I knew our defense as a whole could step up and handle that pressure, even at this level.”

Detroit Country Day finished this spring 15-7. Forest Hills Central, winner of the title in 2010, capped this season 21-2. FHC was No. 1 and Country Day was No. 2 in the LaxPower computer rankings heading into the Regional semifinals. 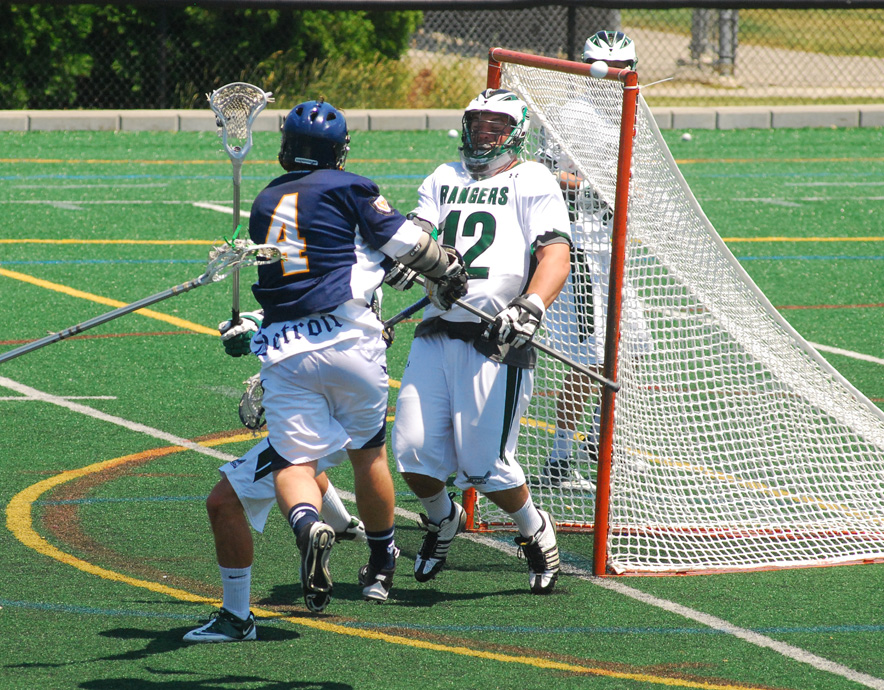 Entering the championship game, FHC had given up 5.3 goals per game this season, with Bohrmann saving 65 percent of shots against him. Against Country Day, he stopped 13 of 19 – including perhaps his biggest of the season on a point-blank shot with 6:03 to play.

He made his second potential game-saving play with 2:12 to go, diving for the end line to gain possession for the Rangers after another Yellowjackets’ shot sailed past the net.

But he needed help. Junior Luke Gerard (61) and senior C.J. Biggs had combined for 102 goals entering Saturday. And trailing 2-0 after the first quarter, FHC got on the board on a Gerard goal from junior Collin Schlosser 3:20 into the second. But Country Day scored the next two to push its lead to 4-1 and led 4-2 at halftime.

“The whole time, I’m just thinking this is what we worked for. I know my team is going to come through. I just had faith in my teammates,” Gerard said. “We were definitely feeling things out. This was the first time we’d played DCD … and we knew in the second half we’d have to bring it with our offense.”

Schlosser answered with two goals during the first half of the third quarter. His second goal, 5:41 in, started FHC’s four-goal streak capped by Gerard’s go-ahead strike with 14:43 to play in the game.

“They took advantage of the times when we really made some mistakes,” Country Day coach Byron Collins said. “We made some really big errors, I think, errors we had been making early in the season that suddenly started resurfacing as the pressure got a little bit more. I think at times we succumbed to that and didn’t play our style. But hats off to them. It’s gotta take a good team to take advantage of those things.”

Senior Ahmed Iftikhar had 15 saves for Country Day, including a number on shots fired from only a few feet away. Sophomore Shane Switzer scored a game-high three goals for the Yellowjackets and also had an assist.

Sophomore Andrew Kransberger added two assists for the Rangers, and senior Kevin Stephen had two goals, including the one that tied the score 7:25 into the third quarter. Junior Neil Cunningham also scored for FHC.

“I think nerves hit us a little bit. We just talked at halftime; we can win this game. There’s nothing out there we haven’t seen before,” Rangers coach Tony Quinn said.  “We just got our transition game going. That really was the difference. We got some goals moving up and down the field that we probably wouldn’t have gotten in set-up situations because their defense and goal was such an outstanding group.”