By Jeff Bleiler
Special for Second Half

The championship was the fourth in program history, joining one in 2016 when this year’s seniors were freshmen. The past two years, the Rangers fell short to East Grand Rapids – by two goals two years ago and by one in double overtime last year.

“It feels amazing,” Hallock said. “Obviously, sophomore and junior year we didn’t get it, and freshman year we got it but I wasn’t able to play. So just taking it all in, and it’s amazing that I finally played, got some goals and was able to contribute.”

The Rangers finished the year 22-1, their lone loss to Division 1 champion Bloomfield Hills Brother Rice. The Hawks went 16-7 in their first season under coach Zack Grusell, who served as an offensive coordinator for Central in 2015.

“It’s amazing,” Central coach Andy Shira said. “These guys, especially this group of seniors, I’ve been coaching since they were 11 years old. So to see them go out this way is truly special. It’s sad to see it end, but it’s ending in the best way possible for them.”

In six MHSAA Tournament games, Central held each opponent to five goals or fewer and never scored fewer than 17 goals.

“Our senior class has been here four years,” Hallock said. “Eastern is a great team, they’re young, they’ll be here the next couple years too against us probably. But yeah, we’ve been a powerhouse with our senior class.” 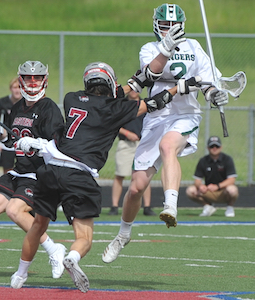 After a first quarter that saw both teams kind of feel each other out – despite being familiar with one another after a 17-4 Central victory over Eastern in April – the Rangers opened the scoring gates in the second quarter and never looked back. Sophomore Carson Deines and Hallock both scored in the opening quarter to give Central a 2-0 lead that grew to seven by the 4:28 mark of the second quarter. Majick scored goals 13 seconds apart in the second, and his third of the quarter put Central ahead 7-0.

Sam Bowen and Kaden Dietrich – two of eight sophomores in the Eastern starting lineup – put the Hawks on the board in the second quarter, which ended with Central going ahead 9-2 on a Hallock goal with 19 seconds to play.

Central outscored Eastern 11-2 in the second half, with a running clock for much of the fourth quarter. Senior Evan Matej finished with four goals and an assist, Deines had three goals and two assists, junior Jackson Clay had two goals and two assists and junior Hayden Sarjeant scored a goal for the Rangers.

The 16-goal margin of victory was the widest in a Division 2 Finals game, with the previous high being eight.

It didn’t help matters that Eastern was without sophomore John Morgan, who had a 120-point season end when he broke his foot in a Semifinal victory over East Grand Rapids. But Grusell wasn’t about to use that as an excuse.

“It’s been an awesome season,” he said. “We’re a young team, and it’s been phenomenal to see these guys get to where they are. We scheduled some of the toughest teams in the state of Michigan this year, and they kind of got punched in the mouth earlier this year and had to do a bit of growing up.

“I can’t give a big enough shout-out to seniors Patterson Alward, Brandon Pham, Isaac Wittlinger and all of our seniors, really. They built this program and got us here. We certainly plan on getting another shot at it, so we’ll try to get back here. It’s been one fun run.”

Bowen finished with two goals for Eastern, and sophomore Kevin Sprague scored the Hawks’ other goal.