BELLAIRE — The dynasty of the Marquette boys skiing team is alive and well.

The Redmen captured their seventh consecutive MHSAA Division 1 championship Monday at Schuss Mountain, and their 14th overall, when they finished 27 points ahead of runner-up Traverse City West, 65-92, to take a convincing victory. Brighton took third with 111 points.

Marquette had the top two finishers in the giant slalom, with Hayden Kauppila finishing first in 47.25 seconds and Aaron Grzelak taking second in 47.54, and had three finishers among the top 10. The Redmen were able to overcome two skiers going down in the slalom by getting four across the finish line in the top 25.

“It feels pretty good for all the work we put in, and it finally pays off,” said Grzelak. “I think it feels pretty cool. All clean runs and a lot of people finishing. We are pretty excited.”

Kauppila led the way as the sophomore posted the top Marquette time in both disciplines, coming in second in the slalom in 1:00.58.

“It’s an awesome experience,” Kauppila said of winning another championship. “I thought I did a great job, personally. I’ve had a pretty good season.” 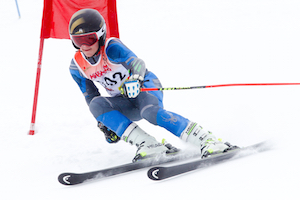 Head coach Dan Menze, who had been in charge of the last three championships for the Redmen, said his team definitely feels some pressure with the bulls-eye on its back each season. But he said his skiers are able to rise above it and perform at a high level.

“It helps because we’ve been there before,” he said. “Most of the teams racing here have some experience, but we’ve got a lot of experience with kids who have raced at this race before or races just as big. So, the nerves for the boys aren’t really much of a factor. It helps them with being calm and being ready to race. There’s definitely pressure to try and produce. We have a lot of great skiers up there. They’re used to it. It’s easier on them than it is myself. I get a little nervous at times.”

Rockford’s Nick Rupert, who won the Division 1 giant slalom a year ago, captured the slalom this season after recording the only time under one minute with a 59.9 to edge Kauppila by just over a half of a second.

Marquette could become the third boys ski team in MHSAA history to win eight championships in a row — joining Traverse City from 1988-95 and Petoskey from 2011-18 — if it wins another title in 2020. With three juniors (Grzelak, Durand and Scheidt) and two sophomores (Kauppila and Audette) eligible to return, the Redmen don’t appear to be going away any time soon.

“I’m very fortunate to have a great program up in Marquette that kind of feeds the high school and makes my job a lot easier,” said Menze.