HARBOR SPRINGS – Bradley Seaborg doesn’t think this is the end of the road for Marquette’s boys skiing championships.

“I don’t think this is the end at all,” Seaborg said. “We’ve still got Andrew Thomas, who is a very good junior. We’re losing four good guys, but we’re picking up a couple good freshmen next year.”

Seaborg is one of those seniors, but he went out by taking the individual slalom championship.

He and the rest of the team also went out a different way.

The entire Redmen team showed up to the awards ceremony – which was held outdoors at Nub’s Nob in Harbor Springs – in khaki shorts, much to the amusement of the crowd gathered.

Besides, the Redmen had their Upper Peninsula championships canceled because of unseasonably warm weather, so why not celebrate being able to win another crown in mild conditions?

“We were all like, ‘What should we wear for awards?’ and we were thinking khakis,” Seaborg said. “Then it was going to be pretty hot, so why not khaki shorts?”

First-year coach Dan Menze didn’t wear shorts, but wasn’t about to stop his boys from doing what they wanted after winning a school-record fifth straight title.

“You have to be professional throughout the day,” Menze said. “But at the end of the day, if you want to have a little fun and celebrate winning five championships in a row, I feel like they deserve to celebrate.”

The Redmen won four straight from 2000-03, a mark now eclipsed by this group’s streak of five.

“For us to break that and get our fifth is pretty sweet,” said Seaborg, who was involved in three of those titles. 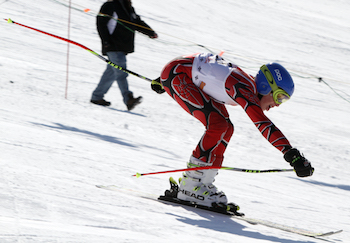 Seaborg is a six-time first-team all-state selection, taking fifth in giant slalom in addition to his slalom championship.

He also won slalom last season and was top five in GS. He was top 10 in both as a freshman before taking off his sophomore season to focus on club skiing.

Menze said he inherited a great program, and added the pressure was on to continue its winning ways.

“I was blessed with an extremely talented team that I walked into coaching,” Menze said. “I’ve coached a lot of these guys coming up.”

Like Seaborg, Menze also isn’t willing to concede that the Redmen’s run could end next season.

“We had a lot of freshmen competing for spots on that A team,” Menze said. “We will have a slight rebuild. You can’t say you’re not going to after you had first and second on one side were seniors and three in the top 10 on the other side. It’ll be an interesting year next year. It’ll be a lot closer than it has been for years.”

“We expected to get second, and we got second,” said Central junior Joe Aulicino, who was seventh in slalom and ninth in GS. “It was kind of exactly what we thought would happen. It’s still pretty cool.”

Forest Hills Northern/Eastern’s Ben Meyers was the only non-Marquette skier in the top four of the event, taking third.