BOYNE FALLS – Coming into this year’s Division 2 Boys Ski Finals at Boyne Mountain, Great North Alpine senior Finn Husband had reasons to be both motivated and reassured based on last year’s results at the championship meet.

Finn felt confident he could win the slalom after doing the same last year, but he also was inspired because a bad turn cost him a chance to win last season’s giant slalom, as he instead finished third in that race.

“I remember that it was my own fault, and I could’ve been a better skier,” Finn said.

Finn certainly couldn’t have been a better skier this time around, as he won both the giant slalom and slalom races Monday.

Even better, Finn’s performance led to some noteworthy news from a team perspective.

For the first time in nine years, a team other than Petoskey won the Division 2 championship.

GNA also had defeated Petoskey at their Regional two weeks ago. 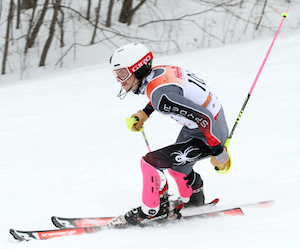 “I told them (Sunday night) that they didn’t have to be extraordinary, they just had to be ordinary,” said GNA co-coach Ben Ferris. “You just have to ordinary. Just be you. You already ski fast. That was kind of the message.”

Conditions at Boyne certainly were a lot different than last year, when it was nearly 40 degrees and slushy.

Following a blizzard and windstorm Sunday night, the course was firm throughout.

“What we had when it rained and then froze up again made it a really nice base here,” Husband said. “Last year, it was starting to get slushy and made it (sink) the course. We had a good base where we can push off of that.”

Andrew Truman of Harbor Springs finished second in both events, finishing with a time of 1:10.50 in the giant slalom and 1:03.89 in the slalom.

The only deviation in the top-5 between the events was that Alex Netzley of Cadillac finished third in the giant slalom in a time of 1:10.63, while Colin Dehart of Rochester Adams took third in the slalom in 1:04.52.

Ultimately though, every other team bowed to GNA, which ended Petoskey’s quest to take over the championship streak record alone.

“They are awesome guys, and I love them all,” Husband said of Petoskey. “But I think we really deserved it. I think we came out and showed them what we had. It was a team effort to really take it.”