HARBOR SPRINGS – Petoskey is back on top of Division 2.

“It’s great to be back on top,” Lundteigen said. “It's nice being on the home hill. We certainly had an advantage racing on our home turf.”

Harbor Springs was feeling the same way, earning the runner-up trophy seven miles away from its school.

“The boys team especially has been challenged every week,” Harbor Springs coach Jane Ramer said. “They've been working so hard, and it's really great to see all their hard work being paid off.”

Jimmy Flom led the Northmen on Monday with the individual title in the slalom and a sixth-place finish in the giant slalom. Flom raced for a time of 1:15.54 in the slalom with the second-best runs each side of the mountain.

Starting off the day with three Northmen on the podium, Petoskey scored 27 points off the giant slalom. Andrew “Tripp” Thomas took fourth place, joining teammates Anders McCarthy and Flom on the podium.

“We kind of locked it down a little bit,” Flom said. “We walked into slalom with a nice lead. Unfortunately our first seed skier tripped, he had a little bobble which kind of hurt us a little bit, but everyone else just skied calm and controlled.” 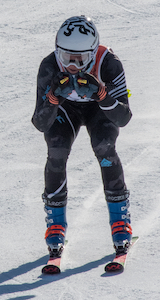 Andrew Truman of Harbor Springs took the title in the morning race, later turning around for a second-place finish in the slalom. In the GS race, Truman posted the best times in both runs.

It was Truman’s first Finals title after finishing second in both the slalom and GS in 2019.

“I was really hoping I could win at least one,” Truman said. “When I won it this morning, I was so relieved that I won.”

Flom beat Truman’s time by 22 hundredths of a second in the slalom. Flom, McCarthy and Will Goelz all finished within the top 12 of that event, and the Northmen were again the top boys team with a score of 29.

“(Truman) is a great racer, and he is a great athlete,” Ramer said. “He's really focused, he's really dedicated to the sport. He practices like he's racing, he's got a great attitude and he’s a joy to coach.”

GNA’s Cooper Kerkhof was right in the fight for first in both events, taking second in the giant slalom and third in the slalom. Andrew Bliss won a pair of medals as well, taking eighth in slalom and ninth in giant slalom.