Petoskey beat out Great North Alpine for the Division 2 skiing title at Boyne Highlands Resort on Monday after missing out on the Regional title to GNA last week.

The Northmen went back-to-back to make it 10 championships out of the last 11 years. The only team to win a Division 2 title during that run was Great North Alpine in 2019, the co-op program combining athletes from Elk Rapids, Traverse City St. Francis and Grand Traverse Academy.

Monday’s win also made the Northmen the third team in the Big North Conference to take home a Finals championship trophy this winter. Traverse City West’s boys and Traverse City Central’s girls won titles just across the street at Nubs Nob in the Division 1 Finals.

Ben Crockett, who coaches the Petoskey boys, wasn't really surprised at that given the reputation of BNC schools producing quality skiers.

"We're getting a lot more challenges from schools in the Grand Rapids and Detroit areas," Crockett said. "To stay on top, we're going to have to keep working hard to be able to stay in the position that we're in, but we're feeling pretty good that we've got such good strength locally here."

Both Petoskey and GNA had a bevy of all-state finishers Monday.

Sully Husband was the only Great North Alpine skier to medal in the morning session, taking fourth in the GS with a time of 1:02.41. Ayden Ferris (13th), Shane Pilate (15th) and Corbin Murphy (19th) each earned second-team all-state nods. Husband doubled up in the afternoon, finishing sixth in slalom, and Ferris joined him at the podium in seventh.

Husband attributed the team's success to getting four solid runs in. He said that's also what led to GNA's Regional title win over Petoskey.

"I'm kind of happy that we got a nice finish," Husband said. "We got second place; kind of stinks that we didn't get first place. But you know, I'm happy that we made it down in one piece because that's really the challenge at the end of the day."

Ben Ferris, who coaches GNA, said it's always nice to bring hardware back. When a co-op school wins a Finals trophy, a duplicate trophy goes to each school that is a part of the co-op.

"It's really about who skis the cleanest all day long and brings things together," Ferris said. "D2 has a really strong skier population anyways, so anytime you get somewhere up and you can make (it) in that top three it's a pretty successful season." 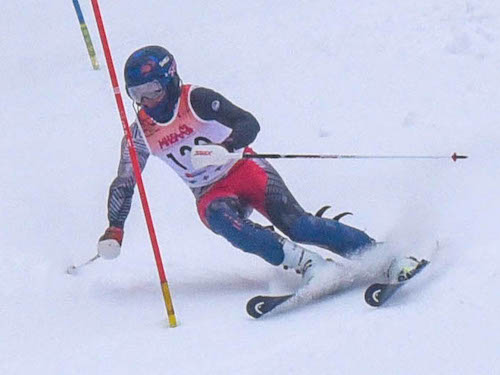 Crockett said 10 titles in 11 years doesn't take away from the years the Northmen won eight straight. If anything, he said it's a good thing to have several teams knocking on the door.

"We want a sport where we have competitive teams and where we're all pushing each other to be better athletes and better competitors," Crockett said. "I think the more competition that we have, and the closer it is, the more the win means."

Jack Lintol led the Fighting Irish in their third-place finish, taking home a title from the morning giant slalom session with a time of 1:01.35. Reed Heathman, who competed individually from Houghton, took second in that same event.

But then Heathman, a junior, came back and beat out Lintol in the slalom for the other individual title of the day. He had the fastest time on his first run with a 39.17 and built on that time with the fastest on the second run as well, a 41.95 to win with 1:21.12.

Heathman took third in GS last year — and said his goal going into last offseason was to improve on that.

“I’m glad to see that was accomplished. I’m happy,” Heathman said. “I didn’t know that I was going to win, but that was the ultimate goal. I knew that competition was going be tough, so I had my work cut out for me.

“I felt in control the whole time. I stayed forward, I stayed ahead of it, it felt good.”

PHOTOS: (Top) Petoskey celebrates its 10th Division 2 championship in 11 seasons Monday. (Middle) Houghton’s Reed Heathman races toward his championship in the slalom. (Click for more from Sports in Motion.)