ROCHESTER HILLS – It wasn’t a pot of gold at the end of a literal rainbow over Stoney Creek High School’s field on Saturday, but an MHSAA championship trophy was still a great prize for Ann Arbor Greenhills.

For the first time in school history, Greenhills is a Finals champion in boys soccer following a 1-0 win over Kalamazoo Hackett in the Division 4 title game.

After the teams broke off for halftime with the game scoreless, lightning was spotted to start what turned out to be an 88-minute weather delay.

Skies eventually cleared, and the teams began the second half playing under a visible rainbow high above the field.

With 23:58 left, Greenhills made its trophy claim.

After earning a corner kick with a rush down the sideline and cross toward the middle of the field that was deflected out of bounds by a Hackett defender, Greenhills senior Jerry Tucker put home a perfect service into the box off of the corner by senior teammate Matthew Pumphrey for the game’s only goal.

Tucker said he deflected the ball into the wide-open net with his hip/waist area.

“In the moment, I saw it was going over the guy’s head and I couldn’t go too low,” Tucker said. “It went off my waist and into the goal.”

From there, Greenhills (20-6-1) didn’t sit back with the lead and managed to put a good amount of pressure on Hackett without giving up any dangerous counterattacks.

The Irish did manage to earn two corner kicks after the goal, but they were harmlessly cleared away.

Greenhills had lost in its three previous MHSAA championship game appearances, the most recent in 2010.

“To be able to win is very difficult to describe,” said Greenhills head coach Lucian Popescu, who coached that runner-up team in 2010.“It’s hard to have words about it.” 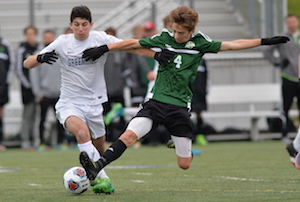 It certainly was noteworthy that Greenhills was able to shut out Hackett, given the Irish (19-2-2) entered the game having scored 34 goals in six playoff games and hadn’t been shut out since its season opener against Mattawan.

“We emphasized simple things we needed to do,” Popescu said. “Instead of marking the forwards, we were actually looking to play more aggressive to try and stop the pass to them. I think we were able to be successful most of the time.”

“They had a great game plan and their back line, in particular their holding midfielders, did a great job keeping us limited in time and space on the ball, which we are not used to,” Troutman said. “We are used to having the lion’s share of possession. We had a little bit of a hard time controlling the ball in their half. Their intensity and speed on defense really helped them out.”

Both teams had to deal with a rare November thunderstorm that forced the lengthy delay, which started at halftime when the teams huddled up for talks with their coaches.

Tucker said he and the rest of his teammates stayed off their phones during the delay, opting for other ways to kill the time.

“We ate come Cliff bars and we stayed calm,” Tucker said. “We kept our phones away and were trying to stay focused on the game. We are good at keeping our mindset.”

Greenhills did, and that trophy at the end of the rainbow Saturday is now headed to its school forever.