COMSTOCK PARK – It was nearly three decades ago to the day that Todd Heugh won an MHSAA Finals championship as a soccer player at Troy Athens High School.

Heugh experienced that same joy as the head coach of his alma mater Saturday after the Red Hawks defeated Traverse City West 4-1 in overtime in the Division 1 Final at Comstock Park High School.

“I was on the 1989 state championship team at Athens, and now in 2019 I win one as a head coach,” Heugh said. “We’ve talked all season about enjoying the journey and this moment of playing on the big stage at a great facility. They seized their moment, and I’m thrilled for them. I know it’s something that they are not going to forget the rest of their lives.”

“I think it’s amazing,” said Red Hawks goalkeeper Jason Kemp, who had four saves. “He talked about it the other day in the locker room, and he pulled out his varsity jacket and his medals and everything. He said 30 years ago he won the state championship, and now you guys have the opportunity in front of you yourselves.

After a scoreless first half, Troy Athens got on the board with just more than 27 minutes remaining.

After a penalty that resulted in a free kick, senior Andri Myftari ripped a shot from just outside of the box into the left corner of the goal.

Traverse City West (18-4-2), which had won 13 of its last 14 games, answered with less than 14 minutes left when sophomore Colin Blackport scored on a penalty kick. 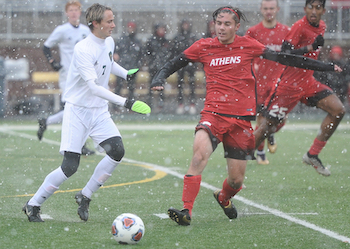 “I think for the first time this season, maybe we got a little rattled after they scored on the PK,” Heugh said. “We started to foul, but we had time to calm down before overtime and we talked about seizing your moment. They are going to have theirs, we are going to have ours, and what are you going to do in those moments. I was super proud of them.”

Both teams failed to score during the first 10-minute overtime period. But over the next 10 overtime minutes, the Red Hawks strung together a flurry of goals to take command.

Sophomore Ryan Gruca had a pair, including the go-ahead goal, and senior Rishi Kalyan added the other to send the Athens faithful into a frenzy.

“We’ve scored in bunches throughout this tournament, so there wasn’t a doubt that we could do it,” Heugh said. “I didn’t think we would get three, but I knew if we scored one then we might be able to score two. We’ve done it quite a bit in the tournament.”

Troy Athens drew inspiration from last year’s disappointment. The team was unbeaten through the regular season before being upset in the District Final.

Thirteen seniors returned from that team in a bid for redemption.

“That was always our motivation coming into the season,” Myftari said. “Just doing better than we did last season, and I think that’s what helped us win. We’ve just always pushed to do better, and we had that grind in us.”

Heugh said last year’s ending was brought up only for a short time.

“We talked about last year for a day, and we were going to make a conscious effort not to do it after that,” he said. “A lot of these kids were on that team and came back as seniors. The just won their 44th game in the last two years playing a difficult schedule, so I’m excited they are champions.”

Titans' keeper Blade Kalbfleisch was outstanding in the net and made a pair of incredible saves.