Okemos' Josh Duren was 11 when his sister was diagnosed with cancer. Still, he understood most of what was happening and what it could mean.

At first, of course, he was sad. But it didn’t take long for Josh to realize that Paige, 8 at the time, would find a way to survive.

“There wasn’t a lot I could do,” said Josh, now a high school junior. “I tried to talk to her more, keep her close, let her know I loved her.”

Paige surely will know again Saturday when Josh wears her name on his back in one of the Chieftains’ biggest soccer games of the season.

Duren will suit up for Okemos’ boys soccer team against rival Mason for the third annual “Compete for a Cause” game Saturday night. All proceeds from the event – which begins with the junior varsity game at 5:30 and is hosted by Mason – will be donated to the CureSearch for Children’s Cancer and the Michigan State University Pediatric Oncology Clinic to benefit children receiving cancer treatment.

Players for Saturday’s Okemos/Mason soccer games will wear jerseys adorned with names of those who have battled cancer. September is national pediatric cancer awareness month, and the first Compete for a Cause game was played in 2012. 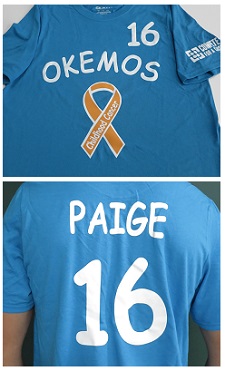 “It’s really cool that I get to go out and play something that I love while spreading awareness for the need for more support, a cure for all cancer, especially pediatric,” Josh said. “I’m really excited to be able to go out and play for my sister.”

Those who follow MSU sports are likely familiar with Duren, who during her treatments formed close relationships with the Spartans football and men’s basketball teams, who in turn have worn purple “Play for Paige” bracelets in her honor.

Saturday’s event was the brainchild of Mason assistant coach Kevin Gunns, whose wife Sheri is a teacher at Okemos and taught Paige, and has undergone surgeries over the last decade because of thyroid cancer. This fall, Okemos' boys soccer team became a partner for the game, with Pam Duren – Paige and Josh’s mother – taking a large role in organization and fundraising.

Okemos is ranked No. 1 in Division 1 this week, and Mason is No. 7 in Division 2. Roughly 800 fans attended last year’s “Compete” game between Mason and Eaton Rapids, and Kevin Gunns said more than 1,000 are expected Saturday. The game raised $1,000 the first year and nearly twice that amount in 2013 – but is on track to raise $10,000 this time.

It also will give the communities and their players opportunities to remember and recognize those who have battled the disease.

Josh may not have been able to help much as his sister suffered through her sickness. But he certainly learned from watching her fight.

When Josh was in Guggemos’ class, Paige was in the latter half of her treatment. Guggemos knew the family was under a tremendous amount of stress. But Josh never showed it.

“Josh has always been a really hard worker in the classroom and on the soccer field. He did his work and was compassionate (toward) others,” Guggemos said. “Josh is one of those kids that other kids like to be around due to his demeanor. I don’t think I’ve ever heard someone say a bad word about him.”

Pam Duren said her family was fortunate Paige was diagnosed when her sons were middle school age. The Durens befriended the family of Jaxon Davis, who underwent treatment at the same time as Paige and also have a daughter who was 2 years old at the time. When the Davis family returned home after treatment, Pam said, they’d been gone from the house so long that the little sister didn’t know things like where to find the bathrooms. (Teammate Anders Staky, a close friend of the Durens, will wear Saturday a jersey for Jaxon, who died in November, 2012, at only 5 years old.) 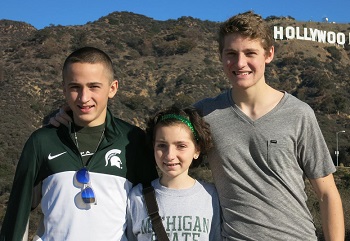 To Josh and Noah’s credit, both continued to excel while providing their sister with support.

Noah is a freshman at Miami University (Ohio) on academic scholarship. Josh carries a 3.8 grade-point average.

“It was very difficult when she was in treatment. It was very difficult for me as a parent knowing they were kinda set aside,” Pam Duren said. “You just don’t have time, and they both responded by trying to do things perfectly all the time. And that made me sad in a way because … it’s almost like they missed a piece of their childhoods. But they really stepped up in every way Mom and Dad hoped.”

Josh clearly is a talented soccer player starting at midfield for arguably the top team in the state.

In his first season on varsity, he’s also brought life experience few others his age have acquired.

Duren admitted watching his sister’s fight made him grow up a little faster in some ways. But it also taught him correct priorities.

Many middle schoolers might consider friends most important at that point of growing up, with family and school sprinkled in. But family, faith, health and school became Duren’s priorities.

And he gained further appreciation for his sister's will.

“I watched her go through what she did, watched her battle, and it taught me a lot of things,” he said. “I learned how tough she is.”

Sports are a big deal in the Duren home. Although Noah didn’t play soccer, it’s a favorite of both Josh and Paige, who also played eighth-grade basketball last season at Kinawa Middle School.

Paige also plays midfield, and well, Josh said. If either is in the backyard working on skills, the other usually comes outside to help. He’s seen her talent close up.

And Josh has noticed her talent beginning to shine through again. “She still has the mind for soccer,” he said. “It’s just her body is trying to get back into shape so she can compete.”

It was both unexpected and amazing, the support his family received from MSU athletes, coaches and administrators – and Josh said that support clearly helped his sister get through her treatments.

Saturday he, his teammates and their opponents will have an opportunity to give as well as learn a little more some of the lessons that Paige’s ordeal brought close to Josh’s heart.

“It definitely was life-changing,” Duren said. “(I’ve learned) to never take anything for granted. It made me learn what’s really important in life, and what’s not important.”

PHOTOS: (Top) Josh Duren is a junior midfielder for the No. 1-ranked Chieftains. (Middle) Okemos and Mason players will wear special jerseys Saturday that include the names of those they are honoring. (Below) Josh, Paige and Noah Duren pose in front of the Hollywood sign during the family trip to the Rose Bowl last winter. (Photos courtesy of Duren family.)