TROY – Junior Emir Cengic had played defender all season. He wasn’t even sure why his coach made the snap decision to move him up front.

But that astute maneuver by East Kentwood coach John Conlon on Saturday helped set up Cengic for the most memorable moment of his high school career.

Cengic hadn’t scored this fall, and hadn’t really had an opportunity while lined up on the other side of the field. But 20 minutes into the MHSAA Lower Peninsula Division 1 Final, Cengic found himself in front of Grand Blanc’s goal receiving a 20-yard pass from teammate Josh Hagene, and then right-footing his own rebound into the net.

His first goal this season was the only goal East Kentwood needed to claim its fourth MHSAA championship. The Falcons outlasted the Bobcats over the final 65 minutes at Troy Athens to come away with a 1-0 win in the final soccer game this season.

“The ball just came. It was a lucky shot,” Cengic said. “I never imagined something like this. It’s unbelievable.

“This is probably the best thing that’s ever happened to me.”

East Kentwood most recently had won Division 1 in 2010, and this season’s title was its fourth in six seasons. The Falcons finished 22-1-4, giving them seven seasons in the last eight with at least 20 victories.

How they won this time bore some similarities to other recent title runs.

In 2010, then-sophomore Charlie Constantino played in the back as well, biding his time as many younger players in the program must before taking leading roles. He was the Falcons’ primary offensive player this fall, and Conlon expects Cengic to move up front fulltime as well next fall.

“I actually had him in class as a fifth grader, and the kid never gets rattled,” Conlon said. “I could put him anywhere on the field. I could probably put him in goal and he’d be fine. We just ask our guys to buy into their roles, and whatever their role is, to take advantage of it. And Emir had a great moment today.” 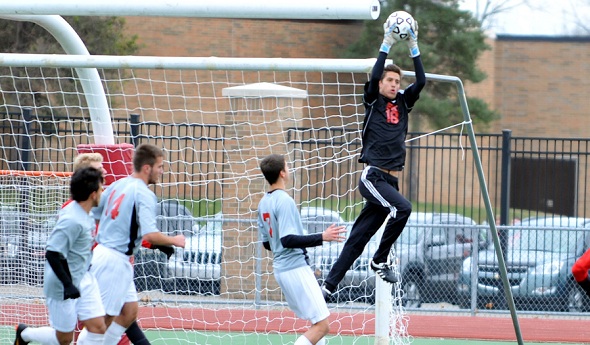 Only two minutes before, Grand Blanc had its best scoring opportunity. Junior midfielder Ali Mukhtar moved the ball ahead to junior forward Nick Berklich, who had a chance from point-blank range that was deflected by East Kentwood sophomore keeper Peyton Gonzalez.

Falcons back-up keeper Denis Duratovic also made a major impact. It was the senior’s suggestion that led to Conlon moving Cengic up on the far side as East Kentwood prepared to throw-in from the sideline side of the field.

The loss was another heart-breaker for a Grand Blanc team that total played in 13 one-goal games this season – but had won the last three and another by two goals in overtime over No. 4 Rochester Hills Stoney Creek in a Regional Semifinal. The Bobcats (16-7-2) could muster only six shots on goal this time, but freshman keeper Pearce Skinner had 11 saves and is one of nine players who should return in 2013.

This was Grand Blanc’s second championship game appearance, and first since 1987.

“I told the guys they’ll be disappointed (Saturday), maybe through the weekend. But when they reflect back on everything starting Aug. 9, the way we battled all year. I think they’ll be happy,” Grand Blanc coach Greg Kehler said. “To get to the Finals is a great accomplishment.

“The experience of this, you can’t replace it. And to have those kids get involved and be a part of this, I think is going to carry on to next year’s young kids. And obviously, that helps greatly.”