However, number 32 turned out to not only be more meaningful than the other 31 combined, but the most important goal of the entire season.

With 6:49 remaining, Pierson stepped up to the line and knocked in a penalty kick for what turned out to be the only goal of the game in a 1-0 Catholic Central win over Walled Lake Central in a title-game matchup that featured two programs playing in the championship game for the first time.

For all the MHSAA championships in other sports the decorated Catholic Central athletic program has accumulated, it now has a soccer title to add to the trophy case.

“It’s 39 years in the making,” Catholic Central head coach Gene Pulice said. “Our first one is definitely historic and impactful. To be the first coach to lead a team to it, it’s impactful for sure.”

Pierson created the scoring chance himself after being fouled in the box by a Walled Lake Central defender.

He got a loose ball on the edge of the right side of the penalty area and took on two defenders as he dribbled toward the goal.

Pierson put the ball through the legs of one defender to get past him and then was taken down by the other, and the official didn’t hesitate to call the foul.

Once he stepped to the ball, Pierson had some familiarity with Walled Lake Central goalie Brian Ostepanko, who made three saves during a shootout in a Regional Semifinal win over Rochester.

An understandably somber Walled Lake Central head coach Joel Sharpe said he had no issue with the foul call.

“I’m not going to argue that,” Sharpe said. “It looked like it. When you dive in and you put someone in the box the caliber of a player Pierson is, bad things are going to happen.”

Before Pierson’s goal, the game was a defensive struggle with few quality scoring chances; it seemed destined for a shootout. 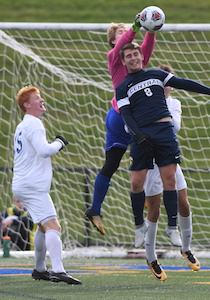 With about 30 minutes remaining, Catholic Central (21-2-4) did start to tilt the field in its favor and carried the play, collecting eight shots and five corner kicks during the second half alone.

Not helping the cause for Walled Lake Central (22-2-2) was a game-ending knee injury to senior defender and captain Karl Tavadia with 33 minutes to play.

Tavadia was the main player marking Pierson up to that point, and Sharpe said he had to move a forward back to help defend Pierson.

Walled Lake Central will bemoan not only its luck with Tavadia getting hurt, but also a glorious scoring chance that came up empty in the final minute of the first half.

With the half winding down, a ball was served into the Catholic Central box and deflected to the foot of a Walled Lake Central player who was right in front of the goal line with an open net in front of him.

But the volley went straight up in the air, hit the crossbar and landed on the goal line to allow Catholic Central enough time to recover defensively.

“Their hearts are breaking, and no matter how good of a season this is and how great of an accomplishment it was to get to the Finals, it’s never easy to console these guys for everything they put into it,” Sharpe said.

PHOTOS: (Top) Detroit Catholic Central’s Ryan Pierson celebrates connecting on a penalty kick that ended up as the Division 1 Final’s only goal. (Middle) The Shamrocks were able to stop this scoring attempt by Walled Lake Central’s Ray Daniels (8).