COMSTOCK PARK – It wasn't a shocker that the MHSAA Division 1 Boys Soccer Final went through regulation and two overtimes scoreless.

Not with a pair of goalies that were on average giving up about a half a goal a game with 15 shutouts each heading into Saturday's championship game at Comstock Park High School.

So it was fitting that all eyes in the vocal crowd at Comstock Park were on Troy Athens'  goalie Mason Maziasz and East Kentwood's Haris Dzafic as both teams lined up to settle the championship on penalty kicks.

And when the five shooters were down for both teams, Dzafic stopped three Troy Athens shots, while Maziasz stopped two, just missing on the game-winning shot by East Kentwood sophomore midfielder Samuel Esquivel.

"I just tried to keep my cool, and expected to make the save," Dzafic said. "It was all about getting on the right side and getting a hand on it. It's an unbelievable feeling, knowing that the team is counting on you."

East Kentwood coach John Conlon, whose team has now won five Division 1 championships, the previous most recent in 2012, was glad he saw the potential in Dzafic as a goalie at such a young age.

"He is another one I have coached since he was like 6 years old," Conlon said. "I used to joke that we put him in goal because he was a terrible field player, and now he is the best goalkeeper in  the state. He has been brilliant for us all season. He gave up two goals in the whole tournament, and he is only a junior."

Maziasz is a senior, and was just as solid in goal Saturday – if not better – because East Kentwood pushed the tempo for most of the game and kept peppering the Troy Athens goal, only to find Maziasz coming up with big save after big save.

He ended  the day with nine total, and many clutch plays against a fast and talented Falcons offense. 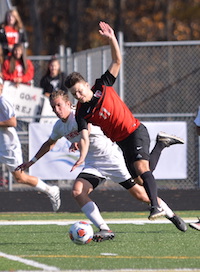 "We died by what we lived by to get here," Troy Athens coach Todd Heugh said. "It's a coin flip when you get to a shootout, but their goalkeeper made some great plays, and credit to our kids for fighting, because I thought they took it to us for long stretches of the game.

"Mason has been great all season," he added. "Count the penalty kicks, this is his 16th shutout of the year, and he has 40 of them for his career. He has double-digit wins for the last three years he has been our goal keeper. He has made save after save, time after time. He's been excellent for us, and sometimes you take a kid like that for granted."

Dzafic ended his regulation and overtime play with six saves. But those three in the shootout will be remembered forever.

“This feels amazing; we just won a state championship," Dzafic said. "I have to give credit to Troy Athens. They are an amazing team with an amazing keeper. We just found a way to hold them off to the end, and then got them in the shootout."

Conlon breathed a sigh of relief.

"I have been on both ends of a shootout, the winning and losing side," Conlon said. "It just went our way today."