When he did, it not only was worth the wait, but provided the Trojans with the winning margin for their second straight MHSAA championship.

Jones assisted on the game-tying goal late in the second half and scored in overtime to spark East Lansing to a come-from-behind 4-3 victory over Bloomfield Hills Cranbrook Kingswood in a thrilling, seesaw game at Brighton High School.

It was the fifth MHSAA championship in boys soccer for East Lansing and gave the Trojans back-to-back titles for the first time. Jones scored in East Lansing’s 2-0 victory over Spring Lake in the championship game last year, but this year’s goal was more crucial to the outcome.

“Last year, we were definitely more relaxed through the game, and this year was more of a nail-biter,” said Jones, a senior forward/midfielder who said he will play for Michigan State University next year.  “We’ve been determined all year, and we were not going to go out on a loss, especially in the state championship game. We really wanted to make history, and we did it.”

The Trojans held a 2-0 lead late in the first half, but Cranbrook Kingswood made it a one-goal deficit just before halftime. The Cranes added two more goals in the second half and held a 3-2 lead with less than seven minutes to play when Jones set up Elmedin Celovic, who scored the tying goal on a header in the 34th minute of the second half.

“That’s the type of player that he is,” East Lansing coach Nick Archer said of Jones. “He will see someone in a better position and lay the ball off. He’s a very unselfish player, and he has the talent to play both sides of the ball. He’s a real team player.”

The goal not only tied the game, but seemed to fuel East Lansing with some much-needed momentum.

“I just wanted to put it in the back of the net when I saw it coming,” Celovic said. “From there on, we just had to fix every mental breakdown that we had earlier that caused them to come back in the game and take the lead.

“I think after the tying goal before overtime that we did take the momentum. After that, the little huddle we had, we regrouped, and we weren’t going to let them have anything. We were just going to hang on to the ball, and we didn’t want them to come back in the game.”

In the first 10-minute stretch of overtime, Jones provided East Lansing with the lead when he crossed from the left side of the net and put the ball in the far corner in the third minute for an unassisted goal.

“I saw a space in the area where I took a shot before, so once I got there, I knew if I hit the shot hard enough, it would find its way to the back of the net,” Jones said. 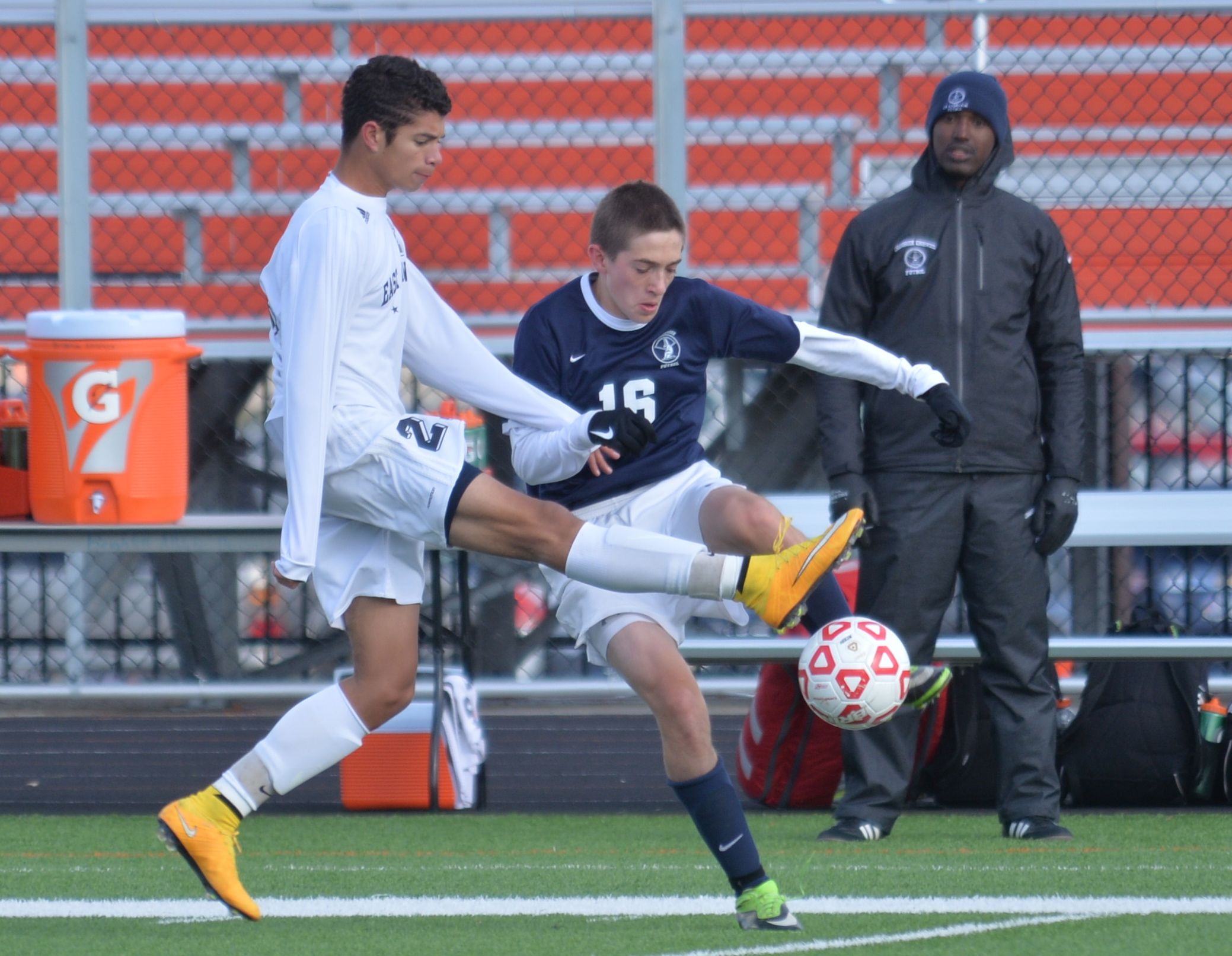 The goal capped an incredible postseason run for Jones, who scored in each of East Lansing’s seven tournament games, including a five-goal performance in the District Final. He had 11 goals in seven playoff games and finished the season with 23 goals and 15 assists.

Still, the goal did not immediately end the game as overtime consists of two 10-minute periods, regardless of whether one team scores. The teams switched ends, and that was crucial as a strong wind blew from goal to goal and certainly provided the team with the wind at its back something of an advantage.

East Lansing maintained its momentum and kept Cranbrook Kingswood from scoring. It was the second consecutive victory in overtime for East Lansing, which nipped Mason 3-2 in overtime three days earlier in their Semifinal.

“These last two games, I thought I had a couple of gray hairs to give up. I know I don’t have anything left,” Archer said. “We were very fortunate to come out on top both times.”

Celovic got East Lansing started quickly when he scored in the first minute of the game with assists from Jones and Chris Pridnia.

“We just wanted to start out strong and take the lead early and put pressure on them,” Celovic said.

“When I saw the ball drop back, the first thing on my mind was to not kick it over and just put it in the back of the net.”

Midway through the first half, Zach Lane gave East Lansing a 2-0 lead when he beat the goalkeeper with a low shot to the left part of the net on a free kick. It appeared the Trojans would take that lead to halftime, but Ken Kernen of Cranbrook Kingswood outmaneuvered a defender and scored into the far corner of the net from the left side with five seconds to go to the cut lead to 2-1.

“It was a beautiful goal,” Cranbrook Kingswood coach Chad O’Kulich said. “Kenny has just stepped up his game. It was a fun goal to create; they’re still fighting with six seconds left.

“That goal was a huge momentum-shifter because going into the half down 2-0 against East Lansing would have been tougher. We knew we had the wind, so we felt good regardless of what was going to happen. But to score that goal and shift the momentum for us was huge because now you go into the locker room euphoric and elated and ready to go. And we knew we had the wind.”

With the wind at its back, Cranbrook Kingswood scored twice in the second half to take a 3-2 lead. Kernen tied it with his second goal of the game with a header off a throw-in from Simon Heidingsfelder.

When the clock got inside 10 minutes to go in the second half, East Lansing, playing into the wind and trailing by one, had to find a way to score.

“When we went down, we were a little nervous, but I told the boys, ‘We’ve been here before with Mason and Grand Ledge twice,’ ” Celovic said. “I told them, ‘There is nothing to worry about. We still have 10 minutes, that’s a long time.’

It was a thrilling way for East Lansing to win, but a tough way for Cranbrook Kingswood to lose.

“What a battle, what a game,” O’Kulich said. “To be down 2-0 against an East Lansing team and come back and make it 3-2 just shows the character this team has played with the entire season. They’re never out, they’re never down, and they battle until the last second.

Cranbrook-Kingswood, champion of the Detroit Catholic League AA, finished 19-3-1 and appeared in the championship game for the first time

“We walk out of here with our heads held high, and we walk out with the same positive culture that we’ve had this entire season,” O’Kulich said.