Archer may have stepped away this spring after a championship-filled 41-year career. But the mystique he cultivated remains strong – celebrating the coach who started the Trojans’ boys and girls programs and won nearly 1,000 games combined between the two teams, while falling now to his former assistants and players to carry the tradition on.

But of course, after Archer announced his retirement in April, the questions began.

“A lot of people have been talking about his leaving, just thinking it’s a lot different around here,” said Francisco, a captain with Carney this fall. “But it’s not really any different. We just doing the same stuff we did last year, trying to get back to the state championship.”

But Francisco’s answer is accurate for the post-Archer era so far – East Lansing is 4-0 after Thursday’s 2-1 win over Williamston.

The post-Archer continuity is found especially in the coaching staff. Longtime junior varsity coach Jeff Lyon was promoted to take over the varsity, and longtime Archer assistant Henry Rojas is running the JV this fall – both have been part of the program for more than 15 seasons. Lyon’s assistants JP Navarro (class of 2013) and Julian Birge (2012) both played for the Trojans, as did freshman coaches Zack Curtis (2006) and John Pizanis (2003). (All four were high school standouts, and Pizanis, Curtis and Birge went on to play collegiately.)

“I think when somebody asks, ‘What’s it like to replace a legend?’ no one here is going to place Nick Archer,” Lyon said. “And that’s not because his name’s on the stadium or because he’s won close to 1,000 games between the boys and the girls.

“It’s because of his impression on soccer. As somebody who stood next to him for half his career, you see why he did the things that he did.”

Lyon still has the card with Nick Archer’s phone number that led him to East Lansing High School 21 years ago.

A standout at Cheboygan – he was part of the program’s first winning team as a junior in 1993 – Lyon was taking longtime Michigan State University men’s coach Joe Baum’s coaching soccer class while a junior at MSU in 1997. Lyon told Baum of his interest in coaching – and Baum sent Lyon to one of his teammates from the Spartans’ 1967 and 1968 national championship teams, Nick Archer. 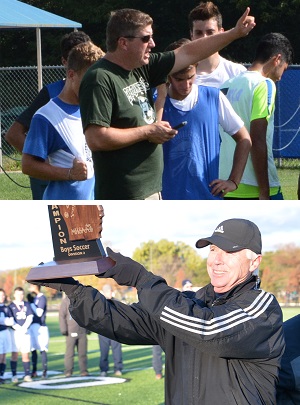 Lyon co-coached East Lansing’s freshman team the following fall, and later started in Archer’s girls soccer program with the freshman in 2000. He got a teaching job at East Lansing as he continued to coach, but went back to Cheboygan after he was laid off from teaching in 2003. Lyon helped out two years at his alma mater, then returned to East Lansing to teach again and coached the junior varsities in both soccer programs. He took over the Trojans’ girls varsity in 2012 (Archer had stepped down after 2009) and continues to lead that program as well.

“He has been an integral part of the East Lansing program's success over the past 20 years. Jeff has exhibited servant leadership to not only the soccer program at East Lansing, but also the school and community during his tenure,” said Petoskey coach Zach Jonker, whose boys teams have faced East Lansing in Regionals four of the last seven years. “His loyalty is also what helps to make him such a great friend, teacher, and coach. He had many opportunities to go create his own successful program over the years, but he embraced developing the younger players in the E.L. program and understood the importance of creating a positive freshmen and JV experience for the program's long-term success.

“I am sure Jeff will put his imprint on the program now that he is at the varsity level, but he is savvy enough to keep many of aspects of the program that evolved over time with Arch as the foundation of their future success.”

Jonker’s perspective is unique, with the frequency his teams have faced East Lansing in must-win games over the last decade, but also because he’s known Lyon “basically since birth.” They grew up playing together in Cheboygan until Jonker moved to Petoskey at age 14, and then they played each other as high school opponents. They also coached club soccer together for a short time, and like Lyon, Jonker followed a legendary coach in Scott Batchelor in taking over Petoskey’s programs.

Lyon indeed isn’t trying to fix something that isn’t broken. In keeping with an Archer philosophy, the Trojans will continue to not cut at the freshman and junior varsity levels. There are lots of little things that will continue on as well, like the “breakfast club” for players who don’t pass the 2-mile running test during tryouts and come in early every day after until they do (or until the season begins).

But there are positive differences as well. For one, Lyon has taught or coached all but one of the varsity players on his team previously – most had him in class for either history or government – while Archer had retired from teaching in 2011. And he’s created more avenues for players to have input. Before the season started, he and the seniors met to discuss expectations and allow the players an opportunity to contribute ideas. He also met with each player individually. “He’s trying to see (through) our eyes on the field, and see our perspectives,” Nystrom said.

“If anything, I think it puts us all on the same page,” Lyon said. “To the teaching piece, you have to ask questions to understand where the process is.”

It’s in a great place as August turns to September.

Francisco has two goals and three assists over the four games, while freshman Ameer Shetiah and junior Cade Moreno both have scored twice. The Trojans, with Carney and sophomore Will Knapp among returnees in the back, have yet to give up more than one goal in a game. 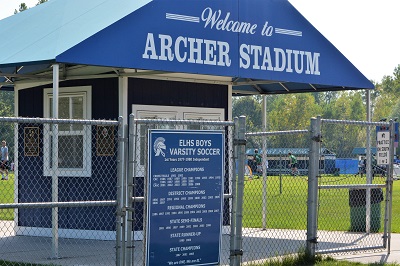 Lyon noted that although many of his players lack varsity experience, the roster as a whole has played a lot of soccer at various levels growing up – and from a skill standpoint, this group might have more than the team a year ago.

And then there’s Lyon and his staff and the value of familiarity. “He's familiar to the program. He knows how Archer coached,” Carney said. “The transition isn't super hard because we all know each other.”

“Hamburger” – that’s what Archer called a player during tryouts two years ago, after said player fired a shot clear over the goal. Carney laughed about that one this week.

There surely will be times this fall too when he and his teammates will draw one some of the Archer effect that helped a team that finished only fourth in its league a year ago come within one more win of a third MHSAA championship in five seasons.

“I think the expectation is to go all the way every year. Because of last year, what we did, and what Archer has done in this decade,” Francisco said. “Last year and this year people doubted us still. People really don't think we're going to finish that high in the conference or anything like that.

“But we know what we're going to do.”

PHOTOS: (Top) East Lansing players scrimmage during Tuesday’s practice at Archer Stadium. (Middle) Coach Jeff Lyon instructs the Trojans on the practice plan, and below, Nick Archer raises the team’s 2014 championship trophy. (Below) The entrance to the East Lansing Soccer Complex bears Archer’s name and the program’s accomplishments under his leadership.