A penalty kick by Aidan O’Connor during the first half and a late goal by Ludwig Tilly were enough to secure the Huskies’ first title in soccer with a 2-0 victory over Melvindale.

“This group of seniors really kept an even keel,’’ said FHN coach Daniel Siminski. “That was a tough matchup today. Melvindale played great. They had a great game plan. In the second half, we settled down.’’

Forest Hills Northern came into the championship on a 45-1-2 run over the past two seasons, with the lone defeat coming in last year’s Final in a 1-0 shootout at the hands of Detroit Country Day. This time, the Huskies finished the year with a record of 23-0-1.

“It was tough coming up last year with all these guys and not getting a win,’’ said O’Connor. “We have 14 seniors, and to get the win was great.’’

Many of the holdovers from that team participated in Saturday’s championship with title aspirations on their minds. Northern had finished runner-up last year and 2015.

Melvindale (16-4-2), supported by an excited community, was experiencing its greatest season ever and had outscored its opponents by a combined 21-5 in tournament play.

The Huskies’ smothering defense was all over the Cardinals early as both teams tried to establish a tempo. 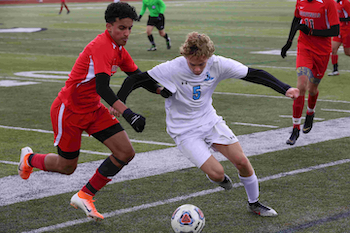 The game turned at the 20-minute, 33-second mark when Northern was awarded a penalty kick. O’Connor beat goalie Julian Castillo, who came into this week with 322 saves on the season, on the left side for the game’s first score.

“We’ve been scored on only four times during the playoffs, and all four times was when I wasn’t on the field,’’ said O’Connor. “Once we got that one goal, I felt the game was in the bag. Everybody knows we have a history of losing in the state finals. It’s good to finally break that standard.’’

Melvindale had a chance to tie the game, but Alhusain Yahya‘s would-be goal was nullified by an offsides penalty.

The Cardinals relied on their starting 10 and Castillo in goal, while Northern went with two keepers, Carter Clark in the first half and Jonathan Kliewer in the second.

Castillo, who singlehandedly kept the Cardinals in the game, went down with 18:04 to play in the second half when he collided knees with a Forest Hill Northern player. Castillo was helped off the field and replaced by Abdul Fattah Ahmed.

Castillo returned with 12 minutes to play to the cheers of the Melvindale faithful. Two minutes later Tilly scored the final goal off an assist from Nate Metcalf to make it 2-0. It was Tilly’s 12th goal of the season.

“It made it more comfortable,’’ said Siminski. “I felt like my defense was handling itself fine. That’s what they had done all year. Getting another goal just nailed it. A two-goal lead allowed us to finish strong. We’re talented. We have good players, starting with Aidan O’Connor, who was Gatorade Player of the Year last year. He’s a tremendous talent.

“There’s not weakness across that line. We have height and speed. You have to beat us. We don’t make a lot of mistakes.’’

Melvindale was playing in its first MHSAA Final in this sport, and Cardinals coach Tomas Belba was optimistic about a return trip.

“Good run, but we couldn’t capitalize when we had the chance,’’ he said. “We tried. They’re a great defensive team, and we couldn’t get any chances. They deserve it. All for next year.’’