BRIGHTON – A perfect season by the Burton Genesee Christian boys soccer team had a perfect finish.

Four-year senior Jesse Oliver scored in overtime to give the Soldiers the winning margin in a 3-2 victory over Kalamazoo Hackett on Saturday in the MHSAA Division 4 championship game at Brighton High School.

It is the first MHSAA state championship in any sport in school history.

“I would say that definitely was the perfect ending to the season,” Genesee Christian coach Doug Anderson said, moments after having a bucket of cold water dumped on his head.

“It’s definitely worth it because it means that we won,” he said. “I didn’t want to prepare a losing speech for these guys, and I didn’t have one ready.”

The feeling of scoring the game-winning goal in overtime was overwhelming for Oliver.

“It’s exhilarating. It’s amazing,” he said. “This isn’t something you get to do every day. I really didn’t expect it, but I was in the right spot at the right time.

“It’s surreal. It really is surreal.”

Genesee Christian (28-0) had leads of 1-0 and 2-1 before being forced into the two 10-minute overtime sessions. Oliver broke the tie when he scored from right in front of the net on a pass from junior Riley Buchalski.

“The ball was at the end line, and it was juggling around a bit,” Oliver said. “I was crashing toward the middle, and the ball just shot out. I was in the right spot at the right time and put it in with my left foot.”

Oliver, who stands 6 feet, 5 inches, was not the most likely player to score the goal. But as a senior, it was a fitting finish. 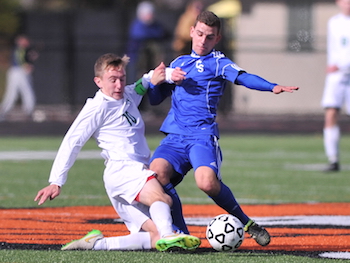 “Jesse is my holding man,” Anderson said. “He has a couple of goals from set pieces and stuff, but he’s our stalwart back there; our workhorse, and I’m so happy for him. He has played all four years. He didn’t play a lot as a freshman, but he just kept getting better and better.”

Genesee Christian made it to the title game with a shootout victory over top-ranked Lansing Christian in the Semifinal.

“I’m sick and tired of these overtime games and the guys trying to give me a heart attack, but it does make it more exciting,” Anderson said. “Obviously, I would have liked to have a shutout, but it gets all the guys into it, and in the end we won, and that’s all that matters.”

Junior Cole Russell, who scored the first goal of the game for the Soldiers, praised both Oliver and Buchalski for the game-winning goal.

“Jesse’s composure to keep it down and put it in the back of the net to give us a 3-2 lead in the state championship game was unbelievable,” Russell said. “Riley was a beast in overtime. He was everywhere.”

Russell, a junior, gave Genesee Christian a 1-0 lead when he beat a defender and the goalkeeper, who came out of the net, and found the back post from about 30 yards out. Ryan DeWeese picked up an assist on the goal.

“Ryan DeWeese, it was all him,” Russell said. “The ball he gave me was unbelievable. I could not have asked for a better ball. I had the easy job, to be honest. It was all him.”

Russell also had an assist on Genesee Christian’s second goal. With the game tied 1-1, Russell got the ball to junior Tyler Rose in front of the net, and Rose scored on a header.

Kalamazoo Hackett (21-5-1) was in its fifth MHSAA championship game and first since 1995. The Irish had not lost in a Final and this time battled back twice from one-goal deficits.

Senior Will Knoll tied the game 1-1 in the 51st minute with an assist from Kieran O’Brien, and junior James Amat made it 2-2 in the 73rd minute on a free kick from 25 yards. The Irish scored twice on a team that had allowed just 10 goals in 27 games.

“Those were very quality goals by them, and they did frustrate us a little bit,” Anderson said. “They have a good team, and they played good defense against us.”

It was a highly entertaining game with several chances and close calls by both teams in addition to some fine saves by goalkeepers Zach Noecker (Genesee Christian) and Matthew Carpenter (Kalamazoo Hackett).

In particular, the last five minutes of the first half were thrilling. The highlight came when Carpenter was caught out of the goal, and the Irish players had to defend in his absence. Amat made two saves in a flurry in front of the net.

Russell nearly score in that span as well as his shot went just over the net and just under the crossbar on the goal posts used for football. He is one of many who have played together since the fourth grade.

“We had a feeling that when we were juniors and seniors that we were going to win the state championship, and we did,” Russell said. “Our teamwork is tremendous, and I am so proud of everyone who played on this team, from the person who played the least minutes to the player who played the most.

“We all put in the work for this, and we earned it.”