GRAND LEDGE – Brendan Garfield plays for one of his town’s most storied sports teams.

But someday, he may be known as an author of another successful chapter in Grand Ledge athletics.

During the spring, Garfield plays for the Comets’ baseball program under Pat O’Keefe, the winningest coach in MHSAA history in his sport. Grand Ledge annually is the team to beat in the Lansing area every baseball season, and it’s considered a privilege to wear that uniform and play for the legendary coach – even in what’s otherwise a football town.

But Garfield's position in spring also gives him a unique perspective on what he and his teammates have accomplished this fall, and really going back to last season, in bringing the Comets’ boys soccer program into mid-Michigan’s elite and relevance in their neighborhood.

Grand Ledge on Wednesday clinched its first Capital Area Activities Conference Blue championship, to go with a program-best 9-0-3 start with CAAC Gold Cup play starting next week. That tournament combines the top teams from all three divisions of the league, and Grand Ledge has a strong argument to be the top seed after winning the Blue and making the Cup championship game a year ago.

“People don’t expect us to be good, which is harder, but we don’t really look for the recognition. We just know we’re that good, and that’s all that matters,” said Garfield, a three-year starter for the Comets at defender. “We’re expected to win (in baseball), but I almost like not being expected to win. Because last year for the Gold Cup, everyone expected us to be out first round, but we really didn’t feel that was going to happen.

“We’re Grand Ledge. When you think about Grand Ledge soccer, it’s not really, ‘Uh oh.’ It’s, ‘Yeah, we might be a close game, but you should win. But last year, we definitely felt we were competing every single game we were in.”

And that’s certainly carried over to this fall.

Garfield is one of 13 seniors on a team, and one of six that make up a defensive back that has given up only five goals this fall – and gave up only one over the 10 games between the team’s opening-day win against DeKalb, Ill., and Wednesday’s clincher against the Rams. If the Comets stopped playing today, they’d be tied with the 2013 Saline team for fewest goals given up in a season. As it is, they will make the MHSAA record book list as long as they don’t give up more than seven more the rest of the way.

Grand Ledge is unranked this week in Division 1, but expect that to change soon. In addition to a tie earlier against now-Division 2 No. 1 Grand Rapids Forest Hills Northern, the Comets opened this week with a draw against Division 2 No. 2 East Lansing – which then lost to Okemos on Wednesday to allow Grand Ledge to secure the league championship outright.

It actually was a loss to Okemos last season that showed eighth-year coach Scott Dane what might be in store for his team.

Grand Ledge lost a home game 1-0 to the Chieftains last September to move to 6-3-2, but felt they deserved to win. From that day on, momentum started to roll. The Comets beat the Chieftains 3-2 in the Gold Cup semifinals in October before then losing to East Lansing in the final and eventually finishing 11-7-2.

Fast forward to the first game of this fall, against DeKalb at an event in Fort Wayne, Ind. Grand Ledge trailed 2-0 by halftime, and Dane was OK with that – he was playing his full roster and figured his guys were sorting things out.

But Grand Ledge came back to win that game 3-2.

“That’s when I thought mentally we’re really good out there. Game one and you’re going to have that mentality? We won the next day 1-0 (over Fort Wayne Concordia Lutheran) and I thought, OK, maybe we’ve got something here,” Dane said. “Let’s put it together and see what happens.

“At the beginning we knew we could compete with anybody. But early on we started putting it together.” 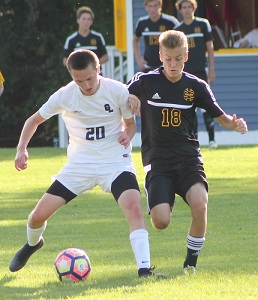 Dane, who played at Holt, coached the junior varsity at Lansing Catholic and also serves as executive director of the Capital Area Soccer League club program, took over a Grand Ledge program that had been solid but with only a few spectacular moments during its recent past.

The school is the second-largest by enrollment in the CAAC, but again, Grand Ledge is a football and baseball town. On the boys side, cross country, wrestling and track & field teams also have had their share of success – and the school’s most notable alum, Al Horford, won two college basketball national championships at University of Florida and this offseason signed with the Boston Celtics.

But there’s room for soccer too, and room on Dane’s team for multi-sport athletes. Garfield is one of three baseball players, and there also is a pair of lacrosse players among others in the lineup. During the winter, many Grand Ledge soccer players also form indoor teams with some of their football-playing classmates – and those games, while not entirely serious all the time, give younger players a chance to gain some experience.

And as this team shows, experience definitely pays off.

Senior Blaine Teahan is a third-year varsity goalkeeper and second-year starter, and he has nine shutouts while giving up only 0.42 goals per game. In front of him at backs are Garfield and seniors Parker Fitzgerald, Owen Schuchaskie and Jared Simmer, and senior Erik Seelman is the holding, or defensive, midfielder.

Senior forward Kyle Salisbury leads the offensive effort with six goals and eight assists, while junior midfielder Nate Cox has five goals and junior mid Aric Phinney has three. Garfield hadn’t scored a goal or tallied an assist all season until Wednesday – when he sent home a loose ball for the game and title-clinching score.

During Tuesday’s practice, less than a day after tying the heralded Trojans and a day before making program history, those players couldn’t have been having more fun racing around during mini games against each other and with just a little goofing off during what was an otherwise laid-back practice.

“I love high school sports. Because quite honestly, we’ve got some kids who aspire to play in college out there, but none of them are top recruits,” Dane said. “Two years ago we had Luke Menne, who is at Michigan State now and obviously a very good player, and we didn’t have the season we’re having.

“I almost call them sometimes a bunch a misfits, who are out here, just playing soccer and having an unbelievable time doing it. It’s the beauty of high school sports. This is the pinnacle of some of their athletic careers, and they’re reveling in it. And that’s awesome.” 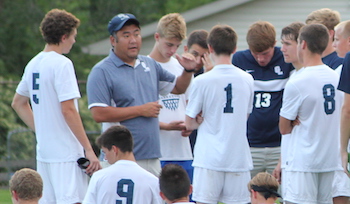 Garfield has been around the program more than most; in addition to coming up as a freshman, his brother Zach played before graduating in 2014. Brendan saw his teammates reacting differently after losses last season to Okemos and East Lansing – they felt they should’ve won instead of just being glad to be in the hunt. He saw their disappointment with his after they lost to Caledonia 4-1 in a Division 1 District opener, which seemed far too early for their season to be done.

Drawing from baseball, he’s brought an approach of having higher expectations to this team. The seniors have set the level, and the juniors are playing up to it. Dane sees those new expectations as well; the top for Grand Ledge now is a team like this capable of playing at an elite level, not just being competitive with the best.

But there’s still plenty to prove and accomplish.

“I don’t think we’ve made it yet, to be honest,” Teahan said. “I’d like it to be that way, and maybe in the future we’ll become that. (But) I don’t think we’re recognized by all our peers as one of the top programs.

“Now people are coming out to our games, mainly our friends, but I think as we go, especially in the Gold Cup, I’ll think we’ll get a good showing and we can make it part of the school culture. Grand Ledge soccer has not been a powerhouse in any sense of the word, but lately we’ve really picked it up. We beat Okemos at Okemos two times in a row, we’re right in there with East Lansing and if we play them in the Gold Cup, I think we’ll get the win. We’re rising up as a big name in soccer.”

PHOTOS: (Top) Grand Ledge's Kyle Salisbury (3) moves the ball ahead during a game versus Jackson this fall. (Middle) Hudson Morgan (20) works to gain possession against Haslett. (Below) Comets coach Scott Dane (third from left) speaks to his team after its win over Lansing Sexton. (Photos courtesy of the Grand Ledge boys soccer program.)