Once the Eagles got rolling, however, they could not be stopped.

Grand Rapids Christian struck twice early in the Division 2 Final against Bloomfield Hills Brother Rice on Saturday at Comstock Park High School and made those goals stand in a 2-1 victory.

It was the first MHSAA soccer championship in 20 years for the Eagles (17-7-2), who reeled off seven-straight wins in tourney play after losing four of their last six regular-season games and tying another.

“Really, (the Eagles began to believe) once we started the tournament. We started getting on a roll, things started clicking and then after that it just started rolling for us,” said Grand Rapids Christian senior Benjamin Kuiper, whose goal with 17:22 left in the first half gave his team a 2-0 lead and proved the winner.

“I felt like after the win against Gull Lake, that was really when we were at our highest and our peak. After tonight, it’s just amazing – it’s great.”

Grand Rapids Christian, which was No. 13 in the last Michigan High School Soccer Coaches Association Division 2 rankings, knocked out No. 1 Gull Lake in Wednesday’s Semifinal, 2-1.

The Eagles also took out No. 8 Petoskey and No. 9 Spring Lake in last week’s Regional.

Brother Rice (10-7-4), which was making its first Finals appearance in a dozen years, had lost three of its last four regular-season games and tied in the other entering the District tourney. The Warriors, who were nowhere to be found in the state rankings, punched their ticket to the Finals with a shootout win over DeWitt in Wednesday’s other Semifinal.

“Putting the school back on the map in the soccer sense,” Brother Rice coach Danny Price said of this season’s success. “Not a lot of people, including the press, were thinking about Brother Rice, and rightly so after the last seven or eight years.

“Just so much to be proud of: District title, Regional title. Everything we’ve done this season has been perfect. (The Eagles are) a good team – take nothing away from them.”

Grand Rapids Christian got on the board with 27:32 left in the first half when senior Hans Pruis beat the Brother Rice keeper to a loose ball and knocked it into the net.

Immediately following Pruis’ tally, as well as Kuiper’s 10 minutes later, the Eagles goal-scorers and their teammates sprinted over to the stands on the south side of the field and celebrated in front of a large student section. 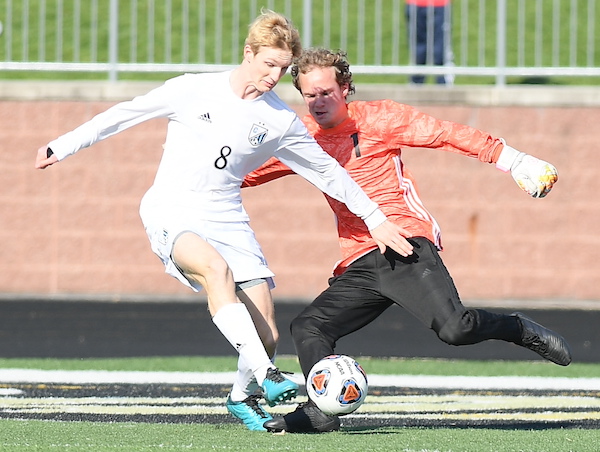 Trailing 2-0 at halftime, Brother Rice came out in the second half with much more urgency. The Warriors pulled within 2-1 with 13:54 remaining, when senior Romas Mitrius scored on a header off junior Enzo Bordogna’s free kick.

That proved the only blemish on the day for Grand Rapids Christian junior keeper Alexander Scofield, who finished with nine saves. Junior Henry Allen made six saves for Brother Rice, which was outshot 13-10.

Eagles coach Aric Dershem acknowledged his team went to more of a defensive approach in the second half, knowing that the Warriors were going to turn up the intensity.

“Oh, man, (Scofield) came up so huge today, yes. Coming into this season, he was fighting for the starting spot and he just came up huge every opportunity that he had – even in the Semifinal against Gull Lake, he kept us in the game,” Dershem said.

“A keeper can’t win the game, but they can lose you the game, and he kept us in the game today long enough that we could just hold on and get the win.”

Grand Rapids Christian surrendered only four goals during the postseason.

Scofield admitted he was a little nervous in the second half, but he and the defense in front of him got the job done.

Grand Rapids Christian’s seniors lingered around the Comstock Park stadium to take photos with the championship trophy, which will go alongside the Eagles’ titles from 2001 and 1998.

Kuiper was one of the players savoring the moment, which some may have not thought possible as recently as a month ago.

“Oh, it’s amazing,” Kuiper said. “The past few years, we haven’t been doing the best in the tournament, so it feels amazing to go all the way.”