By Jeffrey Norris
Special for Second Half

COMSTOCK PARK – By his own words, Adam Skehan is a pretty emotional person.

But when he gets on the soccer field – and more importantly, inside the goal box – Skehan has nerves of steel.

That save allowed Skehan's Red Devils to extend the game into overtime, and ultimately win it in a shootout, where once again Skehan came up big with two saves to propel Grosse Ile to a 2-1 win over the Sailors.

"When I was going into the shootout, I was so scared," Skehan said. "But I put all the emotions behind me, and came out and played for my team. And now I am so happy. After that last save, I don't even know, I just started crying."

Skehan stopped two shootout attempts by South Christian players, including the last of the game by senior Rylee Visser.

The Sailors also had one of their shots hit the sidebar of the goal in a game that was measured by inches throughout.

The win Saturday came a year after an overtime Division 3 Final loss to Hudsonville Unity Christian, and gave the Red Devils their second title in program history to go with the first earned in 2002.

"This is something we have been after for four years," said Grosse Ile coach Jon Evans, whose team has advanced to the Semifinals four of the past six seasons. "We always felt like we could get here, but it was always just getting over the hump. This year we were fortunate to win in a shootout."

And Evans is fortunate to have a keeper like Skehan leading the way. 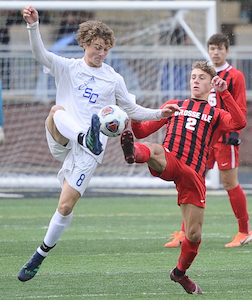 Skehan finished with seven saves, and came up big especially during the second half and overtime when South Christian was pushing the tempo.

"I would say they definitely had more chances than we did, especially going into the second half when we had the lead," said Evans, whose team ended with a 24-2-1 record. "They really applied the pressure, but Adam came up big a couple of times and made some big saves for us to even get us to overtime. "

The Red Devils got on the scoreboard first when junior midfielder Bosh Tanyi scored on a hustle play at the 26:34 mark of the first half.

Tanyi got loose on a through ball and beat South Christian keeper Nik Schepers when Schepers attempted to play the ball and Tanyi got by him.

That score held up after 40 minutes of play, but that didn't bother South Christian coach Jason Boersma.

"We had seven games this year where we were down one and came back and won,” said Boersma, whose team ended with a 21-5-2 mark. "That shows a ton about the determination that these guys have. I told the guys before the game that I don't know what is going to happen, but I said it is going to be a great game. And I said if we get down one, I need someone to grab that ball out of the back of the net and run it back and play tough."

That player was senior midfielder Reese Bos, who played inspired soccer during the second half and overtime.

He tied the game at the 20:59 mark of the second half when he beat Skehan to the ball and headed it into the back of the net.

The Bos goal was the first given up by Skehan and the Grosse Ile defense all tournament. Bos had a couple of other chances, but Skehan stopped them.

"Everything was happening very fast. We just let off for the worst seconds that we could have," Skehan said of Bos' goal. "We gave up a goal, and that happens, but we came back and finished strong."