It took Arellano just over a half to put a charge into his team and lead the Dutch to the school's first MHSAA Finals championship.

Arellano scored on a beautiful goal just more than four minutes into the second half, and later assisted on another in Holland's 3-0 win over East Lansing in the Division 2 Final on Saturday at Comstock Park High School.

"His goal was impressive. I thought his assist was more impressive," Ceithaml said. "The guys have a lot of confidence knowing that when we step on the field with him in front, good things usually happen."

The first good thing happened with 35 minutes, 43 seconds to play in the game when Arellano scored the game's first goal on a hard shot off the right side of the Trojans' goal. It was Arellano's 20th goal of the season.

His assist came later in the half, when he dribbled through the East Lansing defense and made a sharp pass to senior midfielder Sam Accardo, who finished the play with his 16th goal of the season.

In between those two scores, senior forward Jose Penaloza put in his eighth goal of the year at the 32:30 mark of the second half.

"We just needed to get a rhythm going," Arellano said. "We just remained focused, and that was key. While we were in the huddle (at the half), Coach was telling us, ‘You want this more. There is no other team out there that wants this more than we do.’ Now that just proves it, because it is our first ever state championship."

Ceithaml admitted there weren’t many adjustments made after a tough first half that included a steady cold rain. He just tried to will his team to play a little better and pay attention to the little details that got the Dutch to this point. 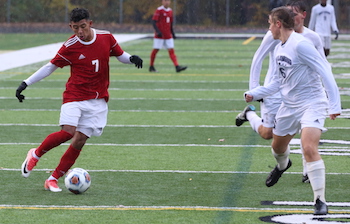 "I didn't think we possessed the ball very well (in the first half), and I give credit to East Lansing for that," said Ceithaml, whose team finished its historic season with a 19-5-2 record. "And the conditions, I told the team, we need to connect passes batter in the second half, and they did that. They executed."

On the other side of the field, East Lansing coach Nick Archer said his team was just unable to finish.

"It was a game of two different halves," said Archer, whose team ended its season with a 17-10-1 record. "In the second half, when they broke through, they finished on us. They just got through our defense, and we got caught a little flat footed. We had a couple of opportunities; we just didn't put them in.

“They are very explosive, and the few seconds they were able to explode, they got through,” Archer added.

Now Ceithaml must say goodbye to a superb senior class of 14 players who struggled a bit when they were freshmen, but made history on their way out.

"We took our lumps (early), but we were learning," Ceithaml said. "Then last year Regional Finals, and then this year (the championship). I feel we have grown and evolved together, and I couldn't be happier for them.

“Right now I am speechless, I am just happy for the boys. I am glad they created a memory that I hope they carry with them for the rest of their lives."