Under constant pressure Saturday at Comstock Park from undefeated and top-ranked Grand Rapids Forest Hills Northern, Dougherty, the senior goalkeeper for Detroit Country Day, made save after save throughout regulation and then overtime to keep his team in a scoreless Division 2 title game.

Then in the penalty kick shootout, Dougherty made one more big save and the Huskies missed the net on another shot, giving the Yellowjackets a 4-2 advantage in penalty kicks for a 1-0 victory and the program’s state-record 15th MHSAA Finals championship.

The title Saturday was the program’s first in Division 2. The Yellowjackets moved from Division 3 this fall.

"Credit to Forest Hills Northern, they were a great opponent," Dougherty said. "They were big, fast and physical and really wore us down the whole game. I just did what I had to do to keep the ball out of the net. I just kept telling my defenders where to be in position, and they did a (heck) of a job, too."

During regulation, Dougherty stopped 12 Forest Hills Northern shots. He stopped four more in the two 10-minute overtime periods. Then the one in the penalty kick session to give him a full day’s work and make his coach very proud.

"They (FHN) are a wonderful team," said Detroit Country Day coach Steve Bossert, whose team ended the year with a 20-5-2 record. "And we had a good gameplan, the kids executed it and I think we have the best goalie in the state. He made the difference." 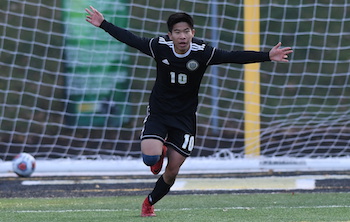 "Some of those flighted balls early, he had to reach over and make great saves in a lot of traffic," Bossert said. "And they have a lot of big bodies. He was the best."

The higher-regarded team coming into Saturday's title game was the Huskies, who had not lost in 24 games this fall.

And Forest Hills Northern played like that all game, controlling tempo and pushing the ball into the Yellowjackets' defensive end time and time again. But the Huskies could not penetrate Detroit Country Day's defense and Dougherty.

"It doesn't really matter if you don't score," said FHN coach Daniel Siminski, whose team ended its year 23-1-1. "This is my fifth state finals, and I have lost three on PKs. And when you are or are not the best team, today they were the best team because they won, shots or no shots."

The Huskies also fell in a shootout in their first championship match appearance, to Mason in 2015.

"Country Day played a great defensive game," Siminski added. "They made it difficult for us to create. And when we had chances, we didn't score. That is how it goes sometimes. This is a tough pill to swallow after the season we had."

The championship was Country Day’s first since 2011.

"This was a great high school soccer game," Bossert said. "I think it is a shame that somebody has to lose like that. Obviously, I am very excited that we won. I am not a very big fan of the tiebreak, but it is what it is and we ended up on the better end of it."