MARSHALL — February 1 is a red-letter day for Andrew Shippell.

However, the Marshall senior doesn’t have a huge celebration planned — not yet, anyway.

As a freshman in the fall of 2012, Shippell and his Redhawks teammates were pumped as they headed into the Division 2 Boys Soccer Districts.

But Shippell had been dealing with pain in his shoulder. It went away, but when it returned in his other shoulder a week later, his mother, Theresa, took him to the doctor to have it checked.

When the doctors got the results of his blood counts, they wanted the diagnosis confirmed, so the Shippells ended up at Bronson Methodist Hospital in Kalamazoo on Oct. 19, 2012.

“They knew before we went over that his blood counts looked like he had leukemia, but they wanted that confirmed by the oncologist,” Theresa Shippell said. “We knew by midnight that we were in for a long haul.”

Thankfully, the journey is nearly complete.

February 1, 2016, is the day Andrew is scheduled to end the maintenance phase of his chemotherapy and will be chemo and pill-free for the first time in three years.

His diagnosis back in 2012 was acute lymphoblastic leukemia, and all of a sudden the soccer team was without its leading scorer.

“I just didn’t think it was possible,” his dad, Dale Shippell, said. “That kid, as strong as he was, being taken out like this was ridiculous.

“His eighth grade year, just three months prior to that, he was breaking school records in track and field. Seeing him lying in that bed after having his port put in was just devastating.”

That season, Marshall won the District title but lost in the Regional Semifinals.

“I really believe we won districts for Andrew,” said senior Alec Kraushaar, Andrew’s longtime friend and teammate. “We came together.

“We weren’t the best skilled team, but we fought and we had a reason to fight. We wanted to let Andrew know we had his back in this.”

Instead of heading back to Marshall following the 4-3 double overtime District win at Coldwater, the team went straight to Bronson Methodist.

“Alec and the whole team came up to see him after they won districts,” Dale Shippell said. “He literally was just out of recovery when they walked into the room with the trophy.”

Shippell was back on the soccer and baseball fields by his sophomore year and ended his high school soccer career this fall the way it started: with a District title.

The Redhawks lost 2-0 to Plainwell earlier this month in the Regional Semifinals.

“I think he played more minutes than he did all season in our very last game against Plainwell,” Marshall’s first-year coach Hans Morgan said. “I told him he was the best player on the field that day.

“I pushed him as long as I could push him because we needed him out there. His fitness was never less than anyone else’s. He’s a very, very talented player.”

Even though he never played 80 minutes straight, Shippell led the team in scoring this season. He and Matt Terry scored nine goals each, and Shippell added a team-high 14 assists “so he blew everybody out of the water in terms of total points,” Morgan said.

Looking back to their freshman year, Kraushaar remembers the impact Shippell’s diagnosis had on the team when it first heard the news.

“I was at practice,” he said. “Coach Tony (Tartaglia) got a call and had us huddle up. He goes, ‘I have some news. Andrew has been diagnosed with leukemia.’ 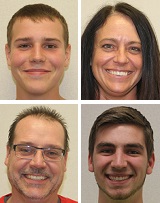 “My reaction at first was ‘What’s leukemia?’ Someone said cancer. I immediately thought the worst. I broke down. I remember going to the bench and just sitting there and crying. What else could I do? Districts were that week.”

Said Theresa Shippell: “I have two boys and that was probably the worst news I’ve received my whole life. You think of the cancer. It’s not a pretty word. It’s a scary word.”

Andrew Shippell said his first thought was whether he would survive, but the doctors quickly assured him that the leukemia was found early enough and was treatable.

His parents also were assured that his twin brother, Ben, should not be affected.

“We asked the oncologist right away and he said no because fraternal twins don’t tend to have the same diagnosis,” their mother said.

During Andrew’s freshman year, the teen kept up with his school work via the Internet so “I’d be able to graduate on time with my class,” he said. “My teammates supported me through everything and made sure I’m pushing as far as I can go. They know my limit and, if not, I’ll let them know.

That first year, “One of the teachers (girls cross country coach Steve Wissink) had hair down to his shoulders and he cut it to raise money.

Morgan said he did not know about Shippell’s leukemia when he took over the coaching job this year.

He had a meeting with Shippell and Kraushaar during the summer to talk about the team and its goals.

“In the middle of the conversation, Alec mentioned Andrew’s going through chemo and recovering from leukemia,” Morgan said. “My jaw must have hit the floor because I had zero idea whatsoever. It was surprising, to say the least. It’s shocking he’s done so well.

“I remember I tried to save face a little bit that day and talked about how good it was that I knew it now and how we might have to manage minutes, play him in short bursts or something like that.

“Other than a few e-mails that Andrew might be late to practice that day because of medical stuff or practicing with their shirts off because you could see where the port was, outside of those two things, I would have had no idea.”

Looking back, looking ahead

Since his freshman year, “He’s had about 15 spinals since he was diagnosed where they treat his brain with a chemo,” Theresa Shippell said. “He’s had shots in the leg.

“He’s had three- and four-day stints of chemo through his port for 24 hours at Bronson, then flush it until his counts were back to normal. Usually two to four days there. He’ll be on pills (between 3 and 27 pills a day depending on the day) until February.”

In February, the port comes out but he will be checked monthly the first year and periodically over the next five. 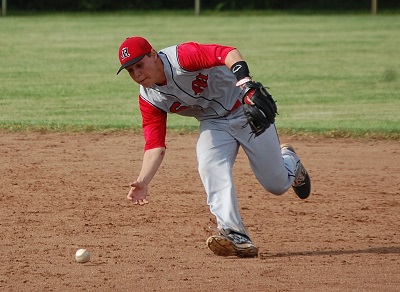 “I’m looking forward to it,” his dad said. “I just want to see him as him again without the extras. This year, he was his freshman year all over again and it was great to see.”

The athlete could not play baseball his freshman year and was on the junior varsity team as a sophomore. This season will be his second on the varsity squad.

Playing second base and shortstop, Shippell “is in the heart of a really good class,” said baseball coach Trevor Kelley, who resigned this year to coach at Albion College. “Watching him practice and prepare, you can see he has tremendous ability.

“Because of his medical issues, he didn’t come back so easily. Once he got confidence, his playing time began to increase and he became a starter.”

The journey has been a learning lesson for many.

“I just wanted to get back to my normal life and not let it affect me,” Andrew Shippell said. “I learned that you definitely have to push through some obstacles in life and no matter what gets thrown your way, you have to keep going and look at the bright side.”

Said Kraushaar: “Now he seems like his own self. For (the soccer team) to finish the way we started was by far amazing. Both of us had great seasons.

“I learned that being a friend, being there for each other, the small things, they go a long way. You have to be there, have to let them know you care. That means a lot to people in more ways than you can realize.”

Kraushaar’s brother, Kurt, a junior on the soccer team, said he was only in eighth grade when he heard the diagnosis and did not know anything about leukemia.

“I knew cancer was a deadly disease,” he said. “You hear how people are fighting it but you don’t expect it to happen so close to home, to one of your friends.

“It was hard knowing what Andrew was going through. Just being there for someone, knowing they have it worse than you. You can’t look at your bad things because there’s someone who has it worse.”

Shippell has a suggestion to anyone else going through medical challenges: “Just make sure you let your family and friends give you all the support they can and don’t block anybody out.

“Keep involved in activities and don’t shut down and let your life stop just because you’re diagnosed with such a horrible illness.”